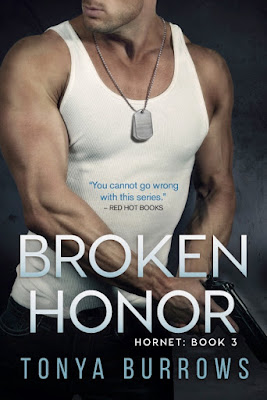 Ice-cold and unbreakable, Travis Quinn is the HORNET team's hard-ass. No weaknesses. Except, of course, for the accident that not only destroyed his career as a Navy SEAL, but left terrifying blanks in his memory. But Travis remembers everything about Mara Escareno—the curve of her lips, the feel of her body...and how he walked out on her suddenly six weeks ago.

Mara could never resist the dangerously sexy Travis, which is probably how she ended up pregnant and disowned by her family. But before Travis can fully process the news, Mara is kidnapped by his enemies and plunged into the violent, merciless world of human trafficking. They want Travis—and the information locked within his damaged memory—no matter the cost. And now Travis's enemies have discovered his only weakness...Mara.

Review:
Broken Honor is the third book in Tonya Burrow's HORNET series and although each of the romances work as stand alone stories I would recommend reading the series in order to get the most out of watching the team bond together as a solid group of brothers. I've enjoyed every one of these stories so was expecting big things from Travis and he delivered on every level. This series is just so much fun to read and I'm always excited to get my hands on a new instalment.

We already knew that Travis has been suffering with blackouts and memory loss since the car accident that cost both him and Gabe their careers as SEALs but they have since built the HORNET team into something that they are very proud of. Travis knows his time with the unit is running out though, it is getting harder and harder to hide his blackouts and on the last operation he ended up putting other team members at risk so he is facing the very difficult decision of having to walk away from everything he has worked so hard to build. Travis and Mara had a hot fling six weeks ago but Travis ran scared when he realised he was starting to develop feelings for her, now Mara is pregnant but before Travis has a chance to step up she is taken hostage to be used against him. Travis knows he doesn't have much of a future and that he has nothing offer a woman like Mara but he will do anything to keep her safe. His last job with the HORNETs is going to be his most important one yet but he wouldn't trust anyone else with the woman he loves and their unborn child.

I've liked Travis from the very beginning of the series but I have to admit there were a few times I wanted to punch him in the face for the way he treated Mara at the beginning of this book. He was scared to admit he had feelings for her so he walked away and left her but it was his reaction to finding out she was pregnant that really made me want to slap him. Thankfully he came to his senses very quickly though so I was able to forgive him fairly easily, especially because you can see just how much he adores her. Once he'd got his head around things he was brilliant and he was soon back to the guy I'd respected and started to fall for in the previous books. Mara is a great character too, she is strong and independent and although she wants Travis by her side for her pregnancy she is willing to do it without him, she won't put up with any of his crap and calls him on his bad behaviour when she needs to. They make a great couple and have fantastic chemistry, even when they're not in the best situations but what I really loved was seeing them working together to escape the situation they found themselves in. I also really pleased that although Mara never doubted that Travis would come to her rescue she didn't sit around waiting for him and took an active role in trying to save herself.

What I love most about this series is the bond between the team members and I've loved seeing this go from strength to strength throughout the series. The guys are bonded now and will always have each other's backs. This is tested a little when Jesse finds out that Travis slept with his cousin Mara, he is absolutely livid that Travis went behind his back and broke the bro code but they work things out in typical alpha man style. I've loved Jesse from the beginning and we get to meet his match in this story, I'm not going to tell you much about her but I will say that I think she's going to really put him through his paces and I absolutely can't wait to see it happen!

The HORNET series has been full of action and suspense but I think that the bar was raised even higher in Broken Honor. Tonya Burrows has been laying down the building blocks for Travis's story since the first book and we see a lot of lose ends tied together here. I didn't find this book quite as heart wrenching as the previous instalment but I absolutely loved the epilogue and I was left with a huge smile on my face. The next book can't come soon enough!