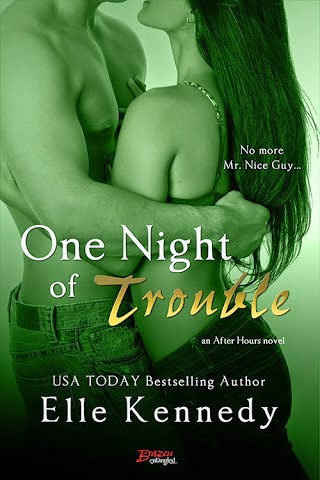 The moment AJ Walsh sees the sexy, tattooed pixie walk up to his bar, it's lust at first sight. He's always been labeled the "nice" guy―opening doors, buying flowers, and never, ever having one-night stands. But with this wicked little angel with red lips and unfathomably dark eyes? Oh, yeah. Tonight, "nice" has nothing to do with it . . .

Brett Conlon is trying to convince her family that she's put away her reckless wild girl side for good. Nothing―and no one―could be better for her reputation than golden boy AJ Walsh. So they make a deal: if he plays The Good Boyfriend for her family, he can be a very, very bad boy with her. Now their one naughty night is about to turn into a whole lot of trouble . . .

Review:
I really enjoyed the first two books in Elle Kennedy's After Hours series but I had a feeling all along that AJ may end up being my favourite. You know that saying "it's always the quiet ones"? Well that sums up AJ perfectly and this nice guy is the hottest hero of the series! The first two stories were hot but AJ practically melted my kindle and his connection with Brett is nothing less than scorching.

AJ has spent his whole life trying to live up to other people's expectations, he feels like his parents are disappointed with the choices he has made and he feels that he owes it to them to do better. It's not just his parents though, he also falls into the nice guy role around his friends and especially with the women he dates. Deep down all he really wants is to let his bad side out and have a little fun but he's worried about letting people down. Brett on the other hand is the only daughter in a family of tattoo artists, she has gone from one bad relationship to the next and her poor decisions have made her the black sheep of the family. She is desperate to prove to her father that she has changed so that he will give her the chance to run the new tattoo parlour that he is opening but one night of passion with AJ may just have ruined her chances. Until AJ makes her an offer she can't refuse, he'll pretend to be her boyfriend if she let's him act out his wildest fantasies in the bedroom. AJ is the perfect good guy to show her family she's started making responsible choices and there is no way she can resist the opportunity to spend more time with the man who makes her feel so much passion.

I loved AJ and Brett together, they both have a wild side and are very adventurous which leads to some very steamy encounters but they also have a lot in common. I love the way Brett brings out AJ's naughty side, she encourages him to explore his deepest desires and fantasies and she's more than willing to try anything he throws at her. Brett has a reputation as a wild child but in reality she's actually really responsible and she's desperate for her family to take her seriously. AJ has a messed up relationship with his parents after an unfortunate incident in his childhood and I absolutely loved Brett for the way she stood up for him and showed his parents just how much they had been hurting him. I also loved the way they bring out the best in each other, they accept each other for who they are and encourage each other to be who they really want to be.

One Night of Trouble was a fantastic end to the series and ended up being my favourite book. It was nice to catch up with the previous couples (although I was really disappointed with some of Darcy's actions which surprised me) and I loved spending time with AJ and Brett. They were the most passionate couple yet but they also had some really sweet and romantic moments and I think I had a smile on my face throughout the whole book. I can't recommend this whole series highly enough though, if you like your romances spicy then you're going to love these three rough, tough, ex MMA fighting bad boys and end up feeling very jealous of the women who captured their hearts!