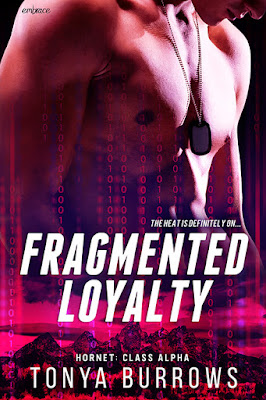 The plan: Hack my way into being part of Class Alpha, a training program for a secretive organization that rescues hostages the government can’t or won’t go after. Save the world and make enough money to pay back my blackmailer—solves all my problems, right?

The complication: Sweet, nerdy, and unbearably sexy Eric “Harvard” Physick. Harvard is my ideal man, but he’s also my instructor. Seriously a no-go, except we can’t seem to keep our hands off each other.

My blackmailer isn’t willing to let me off the hook, though, and a series of freak accidents—deadly accidents—sends Class Alpha into a tailspin. And the more I get to know Harvard, I start to realize his past is just as troubled as mine.

Am I the cause of this chaos...or is he?

Review:
It's been a couple of years since Tonya Burrows published the last book in the Hornet series but I was always hoping we'd get a book for Harvard so I was really happy when I found out about this new spin off series Hornet: Class Alpha, starting with Fragmented Loyalty. Although this series is focusing on the team Hornet have been training Harvard is a member of the original group and you'll see a lot of familiar faces from the previous books showing up as teachers and mentors. I think you could probably start with this book but you'll definitely have a much fuller reading experience if you read the original series first.

Harvard is Hornet's tech wiz and he's been instrumental in many of the team's rescue missions thanks to his surveillance skills and the backup support he's offered. He's an expert hacker and a total nerd, also really sweet and very protective of his team. All Harvard has ever wanted is to find a place to belong, as a child genius who graduated school far earlier than most he never really fitted in with his peers and with a vindictive alcoholic mother he never had much support at home either. The Hornet team have become his family and what he wants more than anything is to prove himself to them.

Sami is also a hacker extraordinaire but one who got caught up with a bad group and crossed some lines as a child and was sent to juvie at the age of 14. Her family disowned her after she was released so she was left completely alone at 18 with nothing and nobody. She made the mistake of agreeing to a favour to a mystery benefactor in exchange for the money she needed to survive and three years later she's still waiting for the hammer to drop. Being accepted into Hornet's training program was a chance for Sami to turn her life around, she wants to make something of her life but when her benefactor finally calls in their favour things go downhill fast.

I was so happy to be back in this world, as far as the series timeline goes not much time has passed, in fact some of this book touches on previous events just from a different perspective, but in reality it's been a while and I enjoyed catching up with the characters. I worried for a minute that I wouldn't remember everyone but it all seemed to fall back into place very quickly. Harvard and Sami are both great characters, I loved the geeky banter between them as they fan out on things like Star Wars and Game of Thrones and it was very easy to imagine being friends with them. They have a lot in common and they had wonderful chemistry but I did find it a little frustrating that neither of them opened up about their secrets a little sooner. It worked for the story but put a bit of a downer on their budding romance. It wasn't too hard to look past that though and I was totally rooting for them to work it all out.

The story has everything I'd expect from a Hornet novel, great romance, lots of intrigue and a nice amount of action. I'm enjoying getting to know the rest of the Alpha Class and I'm very happy that Wolfe's book is up next.