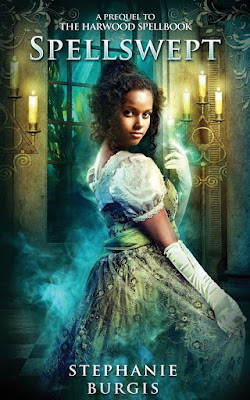 In the world of the Harwood Spellbook, 19th-century Angland is ruled by a powerful group of women known as the Boudiccate - but in order to become a member of that elite group, any ambitious young politician must satisfy tradition by taking a gentleman mage for her husband.

Amy Standish is a born politician...but Jonathan Harwood is her greatest temptation. On the night of the Harwoods' Spring Solstice Ball, in an underwater ballroom full of sparkling fey lights and danger, Amy will have to fight the greatest political battle of her life to win a family and a future that she could never have imagined.

It will take an entirely unexpected kind of magic to keep everything from crashing down around her.

Review:
Amy is an orphan but she managed to earn a job as personal assistant to Miranda Harwood, a respected member of the Angland parliament. As she's a natural politician it is expected that Amy will follow in her mentor's footsteps and join the Boudiccate but to do that first she must marry a respected magician. Tonight at the Harwood's Spring Solstice Ball she is expected to announce her engagement but really her heart is set on the one man she can never have, Miranda's son Jonathan. It would be a respectable match if only Jonathan hadn't refused to train as a magician, instead preferring to focus his studies on history. Now Amy needs to decide whether to follow her head or her heart, or perhaps she can figure out a way to get everything she's ever wanted.

Although Spellswept is technically a prequel to the Harwood Spellbook series I actually read it after reading the first book, Snowspelled, and I think I enjoyed it all the more because I was already familiar with the characters involved. It was lovely to see the beginning of Amy and Jonathan's relationship first hand and I also really enjoyed getting to meet a teenage version of Cassandra. I love the sibling relationship between Jonathan and Cassandra, he is so protective of his sister and a lot of the life choices he's made become much clearer when Amy discovers a huge secret that Cassandra has been keeping.

Stephanie Burgis has created a really fun world for her historical fantasy series, one where the sensible women are in charge of the government while the more whimsical and emotional men are free to pursue careers as magicians. The gender lines are firmly drawn but the complete opposite to what we're used to and it's really refreshing to see such a different take on society.