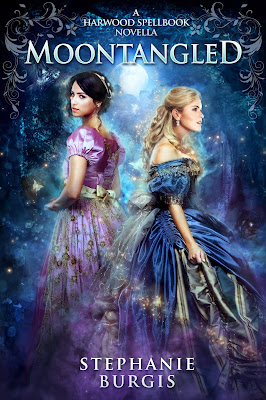 Take one ambitious politician and one determined magician with wildly different aims for their next meeting.

Add a secret betrothal, a family scandal, and a heaping of dangerous fey magic in an enchanted wood...and watch the sparks fly!

For just one moonlit, memorable night, Thornfell College of Magic has flung open its doors, inviting guests from around the nation to an outdoor ball intended to introduce the first-ever class of women magicians to society...but one magician and one invited guest have far more pressing goals of their own for the night.

Quietly brilliant Juliana Banks is determined to win back the affections of her secret fiancée, rising politician Caroline Fennell, who has become inexplicably distant. If Juliana needs to use magic to get her stubborn fiancée to pay her attention...well, then, as the top student in her class, she is more than ready to take on that challenge!

Unbeknownst to Juliana, though, Caroline plans to nobly sacrifice their betrothal for Juliana's own sake - and no one has ever accused iron-willed Caroline Fennell of being easy to deter from any goal.

Their path to mutual happiness may seem tangled beyond repair...but when they enter the fey-ruled woods that border Thornfell College, these two determined women will find all of their plans upended in a night of unexpected and magical possibilities.

Review:
We've met both Juliana and Caroline before so I'd highly recommend reading the previous books in the series before this novella so that you're familiar with their history. Caroline is an aspiring politician with a bright future ahead of her but only if she follows the tradition of marrying a gentleman magician. The slight hitch in that is that she is madly in love with Juliana and the two are secretly engaged. Juliana was one of the first students to join the first magic school for women, the Thornfell College of Magic. Juliana is sure that if she can just pass her exams and officially be recognised as a magician then her marriage to Caroline can go ahead without ruining Caroline's political chances.

A recent scandal has caused Caroline to start pulling away from Juliana though, so just when they're getting close to achieving their dreams it looks like their relationship may be about to fall apart. Juliana is determined to get their relationship back on track but Caroline is trying to protect Juliana's reputation by keeping her distance. One magical night along with one tricky fae and they will either lose each other forever or find their way back to one another.

I'm so happy that Stephanie Burgis decided to give Juliana and Caroline their own story. I've been rooting for the young couple ever since they were first introduced so it was sad to see their respective careers getting in the way of their relationship. Luckily they're both fighters and once they both figure out what is really important nothing is going to change their minds. Juliana and Caroline are a pretty adorable couple but it was also nice to see how supportive Juliana's classmates as well as her teachers are of their relationship.