Get Ready for RIDE WILD with an exclusive excerpt AND a Sale on RIDE HARD!

OMG you guys! I’m so excited! Because the first book in my new Raven Riders series is on sale for just $.99 for a limited time AND I’ve got an advance excerpt from the newest book here for you to enjoy! The Raven Riders is a sexy contemporary romance series, and a spin-off from my Hard Ink world, about a different kind of a motorcycle club with a protective mission. Ride Hard tells the story of a sheltered woman on the run who’s been rescued by the jaded and tormented president of the Raven Riders, who learns that she’s strong enough to save herself and the man she loves, too. Ride Wild is the story of a sexy single father wild with grief over the death of his wife several years before and the strong survivor he hires to be his nanny. It’s hot and emotional and I adored writing it! I hope you’ll check both out – plus they’re standalones, so you can jump in anywhere!

Also, did you know that I’m donating a portion of all my sales from Ride Wild through 11/5 to Noah’s Arks Rescue? AND that you can get a bonus story for grabbing your copy?

Now, enjoy this delicious tease from Ride Wild, coming 10/31/17, and grab your copies of BOTH! Thanks for reading! ~ Laura Kaye

“Do what?” Of course, healing from this was going to take some time. And he’d help her with that however he could. And forgiving herself, well, even when there was nothing to forgive, it was possible to beat yourself up till the end of time. Slider knew that too damn well, didn’t he? As for getting justice—or revenge—the Ravens had already taken care of that when they’d killed her degenerate drunk of a father at their racetrack the night Haven’s father attacked the club.

But none of that was what she meant. Instead, she surprised the hell out of him—not with what she revealed, exactly, because he had an inkling. But instead she surprised him with her courage. “Pretend that I don’t have feelings for you,” she said.

If she hadn’t owned him already, she did as of that very moment. Emotion this in his throat, he tried to tell her. “I’ve been such a fucking wreck, Cora.”

“I know. I didn’t admit that to try to make you say anything back.”

He cupped her face in his hand, because he sure as shit was going to respond to that. “I’m a wreck, and I’d convinced myself that I always would be. But lately, I’ve been trying. I’ve been better. Hopeful, for the first time in years.” Admitting that should’ve been freeing, and it was. But, maybe ridiculously, it was also scary as fuck. Because when you’d become wed to a certain narrative of your life, letting go of it threatened to crumble the ground beneath your feet, leaving you with no idea where you’d be left standing when the dust settled.

Her expression went so, so soft. For him. “I’m really glad of that, Slider. So glad you feel better.”

“It’s you, Cora. It’s me, too, some. But you worked your way into my heart and my head and my house and my whole life until I could see again that I had a life. One I’d been neglecting. One I hadn’t been appreciating. So I don’t know how I’m going to pretend either. And frankly, I don’t want to, not anymore. Because I care about you, too. And not just as a friend.”

“You…really?” she asked, her eyes so wide and her face so damn pretty.

God, she didn’t get it, did she? Just how much she’d done to change his life…But he was going to make sure she did from here on out. “Really. I don’t know where we go or what we call it or how public we go with it, but there’s something here. And I want it. I want you.” 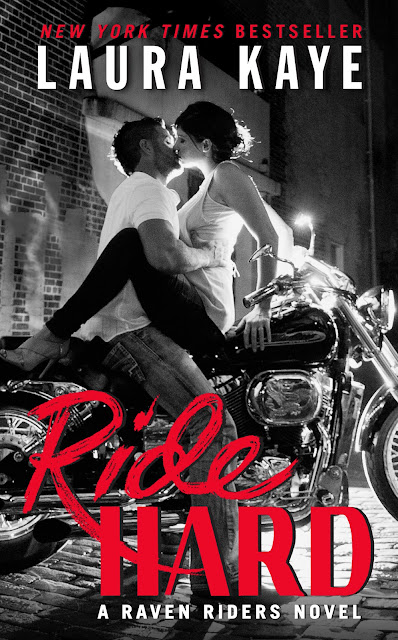 
Brotherhood. Club. Family.
They live and ride by their own rules.
These are the Raven Riders…


Raven Riders Motorcycle Club President Dare Kenyon rides hard and values loyalty above all else. He’ll do anything to protect the brotherhood of bikers—the only family he’s got—as well as those who can’t defend themselves. So when mistrustful Haven Randall lands on the club’s doorstep scared that she’s being hunted, Dare takes her in, swears to keep her safe, and pushes to learn the secrets overshadowing her pretty smile.


Haven fled from years of abuse at the hands of her criminal father and is suspicious of any man’s promises, including those of the darkly sexy and overwhelmingly intense Ravens’ leader. But as the powerful attraction between them flares to life, Dare pushes her boundaries and tempts her to want things she never thought she could.


The past never dies without a fight, but Dare Kenyon’s never backed down before… 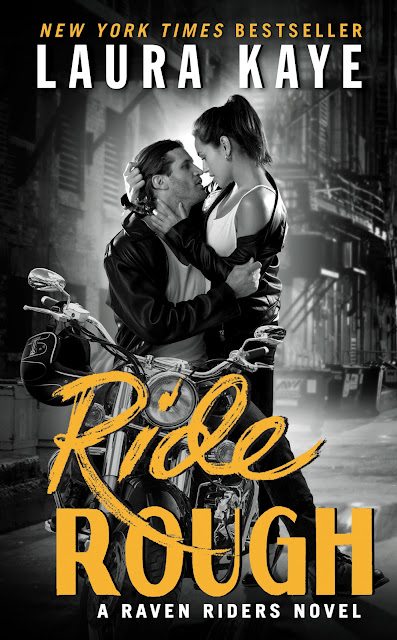 
Brotherhood. Club. Family.
They live and ride by their own rules.
These are the Raven Riders…


Maverick Rylan won’t apologize for who he is—the Raven Riders Motorcycle Club Vice-President, a sought-after custom bike builder, and a man dedicated to protecting those he loves. So when he learns that the only woman who has ever held his heart is in trouble, he’ll move heaven and earth to save her.


Alexa Harmon thought she had it all—the security of a good job, a beautiful home, and a powerful, charming fiancé who offered the life she never had growing up. But when her dream quickly turns into a nightmare, Alexa realizes she’s fallen for a façade she can’t escape—until sexy, dangerous Maverick offers her a way out.


Forced together to keep Alexa safe, their powerful attraction reignites and Maverick determines to do whatever it takes to earn a second chance—one Alexa is tempted to give. But her ex-fiancé isn’t going to let her go without a fight, one that will threaten everything they both hold dear. 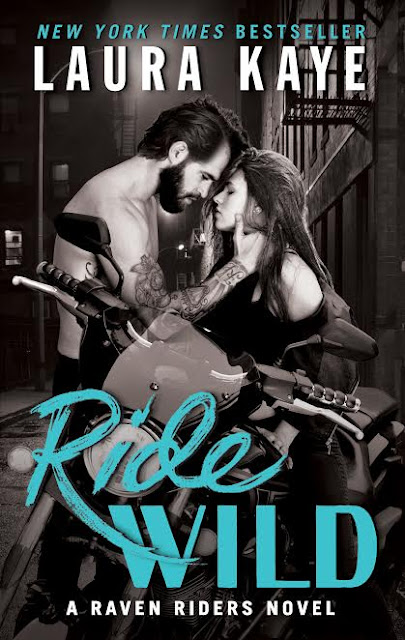 
Brotherhood. Club. Family.
They live and ride by their own rules.
These are the Raven Riders...

Wild with grief over the death of his wife, Sam “Slider” Evans merely lives for his two sons. Nothing holds his interest anymore—not even riding his bike or his membership in the Raven Riders Motorcycle Club. But that all changes when he hires a new babysitter.


Recently freed from a bad situation by the Ravens, Cora Campbell is determined to bury the past. When Slider offers her a nanny position, she accepts, needing the security and time to figure out what she wants from life. Cora adores his sweet boys, but never expected the red-hot attraction to their brooding, sexy father. If only he would notice her...


Slider does see the beautiful, fun-loving woman he invited into his home. She makes him feel too much, and he both hates it and yearns for it. But when Cora witnesses something she shouldn’t have, the new lives they’ve only just discovered are threatened. Now Slider must claim—and protect—what’s his before it’s too late. 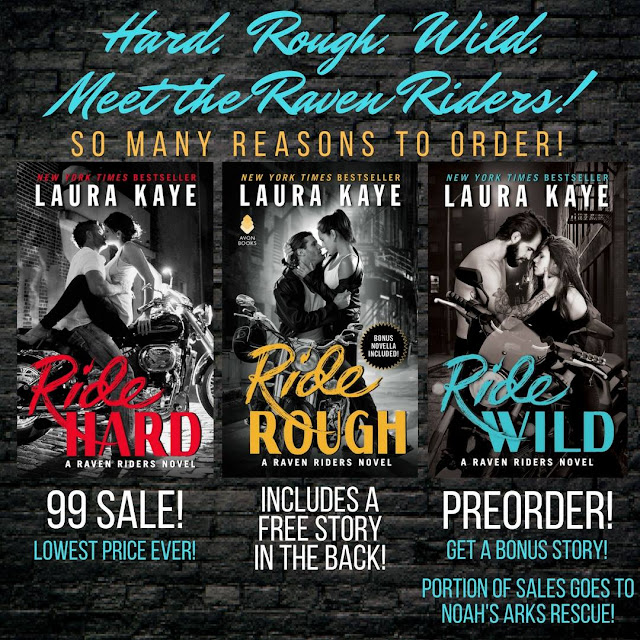 
Animal rescue is a big part of the storyline of Ride Wild, and that’s something that's close to Laura’s heart, so Laura’s giving to the cause by donating a portion of all preorders and sales through 11/5 to Noah's Arks Rescue, a fantastic organization that serves as a source of inspiration for the book. When you grab your copy of RIDE WILD, you're helping a great cause AND you'll get a bonus story when you submit your order info, too!

Submit Your Preorder Info to Get A Bonus Story:https://a.pgtb.me/HRn7Bc