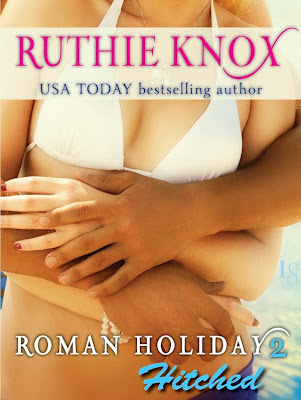 Ruthie Knox’s eBook original serial, Roman Holiday, continues in Episode 2, as Ashley and Roman flee an oncoming hurricane by hitting the highway—only to encounter some outrageous bumps in the road.

Roman Díaz isn’t thrilled about being forced to evacuate Ashley Bowman from the Florida Keys—and that’s before he sees the decrepit Airstream trailer she wants to hook up to his shiny new Escalade. Ashley’s in way over her head, and the only way she knows to beat Roman is to get some help from a friend . . . in Georgia. She can put up with Roman’s fury at the unexpected detour, no problem. It’s the bizarre thrum of attraction between them that she could do without. And yet there’s something about being hitched to Roman that makes Ashley never want to let go.

Review:
I really enjoyed the first instalment to the Roman Holiday serial Chained so I couldn't wait to start reading Hitched. The first part had introduced the main characters but hadn't given us much of a chance to get to know either of them so it was great to learn a bit more about both Roman and Ashley's backgrounds and the kind of people they are. These two really are complete opposites but they actually have more in common than you'd expect thanks to their childhoods. They both felt unwanted and unloved as children but Ashley was lucky enough to find a bond with her grandmother as a teenager and that has given her a sense of security that Roman has never had. He has always been on his own and it goes a long way to explaining why he is so driven and determined to succeed - he just wants to prove everyone who doubted him wrong and show that he is worthy of having a family.

I have to say my heart went out to them both as we learnt more about their pasts and it made me want to see them both fulfil their dreams. I'm not sure quite how Ruthie Knox is going to pull that off though because they both want totally different things. I'm sure she'll find a way though and it will be interesting to see how things play out. I enjoyed seeing how much Roman underestimates Ashley, he thinks of her as a flake who will easily give up on her goals but it doesn't take long for him to realise that there is a steel core inside her. Ashley has nothing left to lose so she isn't afraid to play dirty to get what she wants, she takes great pleasure in pushing Roman out of his comfort zone and deliberately tries to rile him up just to get a reaction. Roman is quite a stick in the mud so I think he needs someone like Ashley to teach him how to let loose and have fun but at the moment he is really fighting against it.

In some ways it's hard to see how these two are going to end up a couple, on the surface they seem so mismatched that to think of them together is almost laughable but there is definitely chemistry there. I also get a strong feeling that their very different personalities will help bring out good qualities in each other, that they'll both learn from each other and grow closer together because of their differences rather than in spite of them. Whatever happens between them it's sure to be an interesting journey, especially now they've arrived at Ashley's friends home - a hippy commune in the middle of the swamp - I can't wait to see how Roman reacts to having to spend time there!