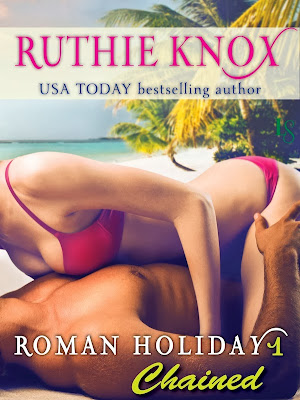 Ashley Bowman is having a bad week. Reeling from the death of her beloved grandmother, she returns to the Florida Keys only to learn that a heartless Miami developer has gotten hold of the crappy vacation rentals she calls home. Ashley has one day to clear out before Roman Díaz destroys the only place in the world that matters to her. Chaining herself to a palm tree in the bulldozers’ path seems like a good way to stop him . . . until she realizes she should've brought food and water. And pants. Also, it would help if the evil developer weren't so ridiculously hot.

The last thing Roman Díaz needs is some sun-kissed blond protester getting her picture in the newspaper and messing up his plans. He bought the property fair and square, and the resort he wants to build on the site is the key to realizing his highest ambitions. But when a hurricane blows through, Roman has to hustle Ashley to safety if he wants to protect his reputation—and that means giving in to her unreasonable demands.

Roman needs to learn a little compassion, and Ashley's decided to teach it to him . . . even if she has to drag him all over the Eastern Seaboard to do it.

Review:
I'm a huge fan of Ruthie Knox so as soon as I found out about her Roman Holiday serialised novel it went straight to the top of my wish list and I pre-ordered the first 5 instalments the moment I saw they were available on Amazon. I'll admit that I don't have the best track record with serials (the ones I've tried to read in the past have always ended up being a disappointment) but I was sure if anyone could hook me on one it would be Ruthie. Thankfully I was right and Chained is a fabulous start to the series and one that has left me impatient to carry on reading!

Ashley is a free spirit, she didn't have the most conventional upbringing and was a bit of a wild child before her grandmother took her in and raised her. Her grandmother's holiday rental in Florida Keys is the only home she's ever really known so although she moved away a long time ago she always expected to be able to come back there when she needs to. She is still grieving for her grandmother when she finds out that the place has been sold out from underneath her and Ashley is horrified to find that a developer is planning on knocking down the house and surrounding properties to make way for a new hotel complex. Ashley is desperate to stop Roman from destroying her home but he won't listen to her. Resorting to desperate measures Ashley chains herself to a palm tree to stop the diggers from moving in.

Roman has been working towards his goal of building a successful hotel for years now and the last thing he needs is a crazy woman in chains getting in his way. He has to find a way to resolve things peacefully though because the last thing his investors want to see is the project in the papers for all the wrong reasons. Ashley is stubborn though and even the threat of an incoming hurricane doesn't seem to be convincing her to move. They need to find a way to compromise but when neither of them are willing to budge from their position it isn't going to be easy.

Ashley and Roman really are complete opposites, where Ashley is fun loving and carefree Roman is buttoned up and determined to play the respectable business man. In a lot of ways I find him too stiff and uncompromising but there are just enough hints at a kind and generous man buried deep down inside for me to be interested in getting to know him better. As this is a fairly short instalment we don't learn a huge amount about his background but I do think he has reasons for the way he behaves and even when he is acting his most standoffish he still goes out of his way to make sure Ashley is safe and unharmed by her protest. They already have some great banter going on between them and I can't wait to see how their chemistry ignites as they spend more time together. I have a feeling there are going to be a lot of arguments between them but when the sparks start flying they are going to be HOT!

The Roman Holiday serial is perfect for when you're short on time but don't want to compromise on story. It's like dipping into a TV series with a new episode becoming available every week that just builds on the background already laid out in previous parts. At around 40 pages each part is easy to read in less than an hour so they make perfect lunch break reading material. Chained had everything I've come to expect from one of Ruthie's stories - great characters, laugh out loud banter and the beginning of a strong attraction. I can't wait to see where things go from here.