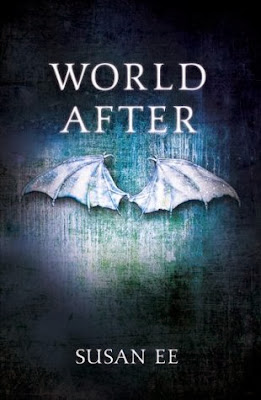 The survivors of the angel apocalypse begin to scrape back together what's left of the modern world.

When a group of people capture Penryn's sister Paige, thinking she's a monsterh, the situation ends in a massacre. As Penryn searches the streets of San Francisco looking for her, she's drawn into the heart of the angels' secret plans, where she learns the horrifying extend to which they are willing to go.

Meanwhile, Raffe hunts for his wings. Without them, he can't rejoin the angels, but when faced with recapturing his wings or helping Penryn survive, which will he choose?

Penryn & the End of Days Series:
Angelfall
World After
End of Days

Review:
I may have been late jumping on the Angelfall bandwagon but I fell completely in love with Susan Ee's characters and the world she created so I can't tell you how relieved I was that I already had a copy of World After so I could continue the adventure. Considering Angelfall was my favourite book of the year I had high expectations for this sequel, ones I was worried it would be hard to live up to, but thankfully World After was just as good - in fact I'd go so far as to say it was even better! I can't praise this series highly enough so if you haven't started reading it yet then I urge you to do so, I promise that you won't regret it.

I really don't want to talk about the plot in this review, I would much prefer to let people enjoy discovering what happens for themselves and I think you'll enjoy it all the more for that. What I will say is that Susan Ee has really ramped up the action, she throws in so many curve balls that it is impossible to guess what will happen next and the story is darker and more creepy than ever. You'll see just how low some humans are prepared to sink in order to survive, in fact I found their behaviour even more horrific than the angels at times and that is saying something! At the same time you get to learn more about the angels' plans and they are definitely shocking. You'll also discover that although Penryn's mother is completely crazy she is actually a lot smarter than most people give her credit for and quite often there is a reason for the strange things she does.

My heart absolutely broke for Paige though, I can't even count the number of times I wanted to crawl into the book to give her a cuddle and tell her everything would be OK even though I couldn't see a way out of the mess they were all in. The dynamics between her and Penryn are very different to the way they were in the first book, Paige is like a completely different child since what happened to her but she loves Penryn more than anything and is incredibly protective of her big sister. In some ways it felt like their roles had reversed but there were some wonderful moments between them towards the end of the book that made me sob like a baby. I'm not going to lie to you, this book is painful to read at times but that just proves how emotionally connected I am to each of the characters.

I will admit that I missed Raffe during the first half of the book, we don't see as much of him as I would have liked but I can understand why the story needed to be told that way and his absence was more than made up for when he does make his appearance. I loved the banter between him and Penryn in Angelfall and I think it was even better in this book, they are incredibly funny together but there are also some really sweet and poignant moments between them. Penryn is definitely one of my favourite heroines, she has to make difficult choices but she always acts in the best interests of the people she cares about, she will fight to the death to protect her family but she also puts herself at risk for complete strangers. She may not always make the best choices but she always does what she thinks is right and you have to admire her for that.

World After is an incredibly dark book but it also has a lot of humour and lighter moments that will put a smile on your face. Dee-Dum are always able to lighten the mood with their silly antics but Penryn has her moments too - just wait until you see the disguise she comes up with for her sword! Angelfall and World After are two of my favourite books ever and this has fast become my top YA series, I just hope that Susan Ee doesn't make us wait too long for the next book because I NEED to know what happens next. It's only been a couple of days since I finished reading this book and I'm already itching to pick it up again so that should give you some idea of how much I loved it!