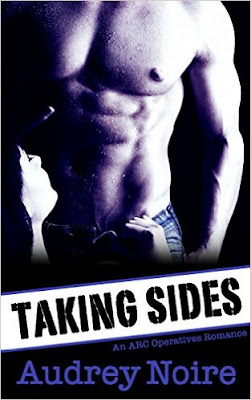 Daria Griffin has completed her first successful mission as a new operative with ARC, and bagged herself a hot new boyfriend in the form of Augmented human, Nicolai Novik. But with ARC’s higher ups taking a dim view of their relationship, her partnership with Nico is getting split up. She’ll be getting a new partner, another Augmented name Bronson. Flung into the rural backroads of Montana with Bronson, will she be able to successfully pull off a new mission with the new guy? And why does Nico hate Bronson so much?

Author's Note: Taking the Bait is a 20,000-word novella. No cliffhanger, HFN. Due to strong language and sexual content, this book is not intended for readers under the age of 18. The first scene from it's sequel is included as a bonus at the end of the book!

Review:
It's always difficult to write a negative review of a book, especially when the author sent it to you for review but I can only give my honest opinion and what doesn't work for me will more than likely work for other people so don't let me put you off giving the series a try.

I had a few issues with Taking the Bait but I was curious enough about the world and the characters that I was happy to pick up the sequel and I was hoping to see an improvement in Taking Sides. Unfortunately the things that I was hoping to see more of didn't happen and I noticed far more editing errors in this story too, I'm not sure if I just noticed them more because I was enjoying the story less or whether the editing had gone downhill because there were errors in the first book too but it didn't feel like as many.

I was immediately confused when I started reading this, I had wrongly assumed that Daria and Nicolai would still be undercover and working on the investigation that they started in the first instalment, the fact that things picked up a month or more later just left me feel like I was missing something. There was absolutely no resolution to events in the previous book: Who was it that broke into their hotel room? Was the business man they were investigating dirty? Did they manage to take him down? Considering he was a suspected human trafficker who had taken a big interest in Daria at their first meeting I went into this completely expecting him to try and take her captive and for Nicolai to come along and save the day!

Instead that story is just over, it's now sometime later and Daria and Nicolai have been in a relationship for a month and, although they've been working as partners up until now, the big bosses have got wind of their relationship and decided to separate them. We didn't get to see much of the start of their relationship but it doesn't bode well when Nicolai suddenly starts giving Daria the silent treatment for no apparent reason. The two then go on another mission, each working with different partners, and while Nicolai continues to act like a petulant five year old Daria mopes around like a depressed teenager because she's stressing about pointless relationship drama. This is supposed to be a series about secret government agents with superpowers so I expect excitement and action not teenage relationship angst.

I worried for a minute that we were going to have a love triangle introduced, thankfully that wasn't the case but instead we had a showdown with the most obvious bad guy in history. I'm not going to tell you who the bad guy is and I couldn't tell you why he was bad even if I wanted to. I'm also not going to tell you if Daria and Nicolai ever got over their snits and had an adult conversation about what was bothering them so you'll have to read the story for yourself to find out. The best I can say is that these are quick reads but it's unfortunate that a premise that could have been so much fun ended up taking a backseat to boring relationship drama.