I get my love of reading from my Dad, I remember constantly begging him to read "just one more story" before bed on pretty much a nightly basis until I was able to read books for myself. He doesn't have to read to me any more but we quite often talk about the various books we've been reading and he's even written a couple of blog reviews for me in the past when I twisted his arm. It's been a long time since his last one but there was obviously something about this book that captured his attention because he actually wrote this review completely voluntarily and it just popped up in my inbox the other day when he sent it to me! 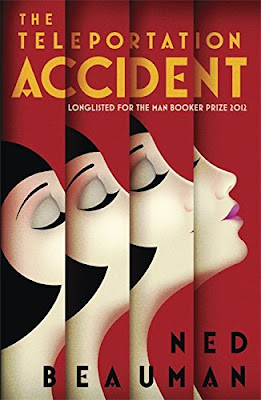 HISTORY HAPPENED WHILE YOU WERE HUNGOVER

When you haven't had sex in a long time, it feels like the worst thing that is happening to anyone anywhere. If you're living in Germany in the 1930s, it probably isn't. But that's no consolation to Egon Loeser, whose carnal misfortunes will push him from the experimental theatres of Berlin to the absinthe bars of Paris to the physics laboratories of Los Angeles, trying all the while to solve two mysteries: whether it was really a deal with Satan that claimed the life of his hero, the great Renaissance stage designer Adriano Lavicini; and why a handsome, clever, charming, modest guy like him can't, just once in a while, get himself laid. From the author of the acclaimed Boxer, Beetle comes a historical novel that doesn't know what year it is; a noir novel that turns all the lights on; a romance novel that arrives drunk to dinner; a science fiction novel that can't remember what 'isotope' means; a stunningly inventive, exceptionally funny, dangerously unsteady and (largely) coherent novel about sex, violence, space, time, and how the best way to deal with history is to ignore it.

LET'S HOPE THE PARTY WAS WORTH IT

Dad's Review:
My main reading, aside from being a Terry Pratchett and J R R Tolkien fan, is normally around Science Fiction/Fantasy and Crime. So I borrowed this book from my local library on the basis of the Title and the first couple of pages, which although wordy showed an enjoyable / oblique sense of humour.

It was not what I expected as it was more a of a Romance(?), although it did pay some respect to Science Fiction.

Although still wordy, I became engrossed with the characters and humour. It was well constructed and I would recommend it to anyone who found the first few pages enjoyable.

"...the two subjects most hostile to his sense of a man's life as an essentially steady, comprehensible and Newtonian mechanical undertaking were accidents and women."

"Had he ever had sex? He supposed he probably had, but the memory was by now so dim that he almost wondered if in fact someone else had just described sex to him once and he'd gradually come to miscategorise it as an experience of his own, as one sometimes does with incidents that took place in childhood"

"The entire apartment was crammed with piles of old books, often with only the narrowest of pedestrian corridors between them, and these piles were continually being rearranged, relocated, or removed, so that after every nap the cats woke up to an entirely unfamiliar topology, like a tribe dwelling in some impossible mountain range that rumbled every hour with random, hyper-accelerated geological convulsions. Yesterday, they might have found a nice ledge, hidden between two volumes of a dictionary, which caught the morning sunlight through the window; today, it would be gone, or it would be too high to reach, or it would topple as soon as they set paw on it. The cats didn't seem to leave the apartment very often, and he imagined it was because they found the great city outside to be eerily, almost unbearably static."

"... studying a portrait of a muscular grey haired man with a grim, almost demented gaze and the sort of moustache that could beat you in an arm wrestling contest"

Source: My Dad's own copy