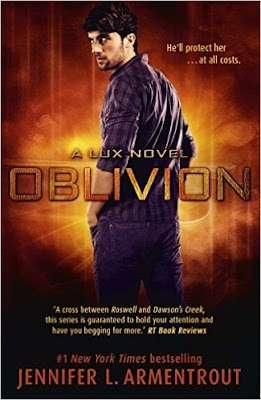 Experience the epic love story of Obsidian as told by its hero, Daemon Black . . .

I knew the moment Katy Swartz moved in next door there was going to be trouble. Lots of it.

And trouble's the last thing I need, since I'm not exactly from around here. My people arrived on Earth from Lux, a planet thirteen billion light years away. Plus, if there's one thing I know, it's that humans can't be trusted.

But Kat is getting to me in ways no one else has, and I can't stop myself from wanting her - or wanting to use my powers to protect her. She makes me weak, and I'm the strongest of our kind, tasked with protecting us all. So this one simple girl . . . she could mean the end for us. Because the Luxen have an even bigger enemy - the Arum, and I need to stay on my game.

Falling for Katy - a human - won't just place her in danger. It could get us all killed, and that's one thing I'll never let happen . . .

Review:
I have to admit I'm not a huge fan of the trend to write the same book all over again but from the male character's perspective, most of the time it doesn't actually add much to the story and I tend to think these books are just a gimmick to get fans spending more of their money so in general I tend to steer clear of them. However, in this case I was really intrigued by the idea of getting into Daemon's head, if you've read Obsidian (and if you haven't then I don't know why you're even reading this review!) you'll know his character was very hard to pin down. The chemistry between him and Katy was scorching hot but he'd go from undressing her with his eyes one minute to giving her the cold shoulder and acting like a complete arse the next. Along with many other fans I fell for him anyway but I was really curious to see whether Jennifer L. Armentrout would be able to pull of giving him realistic and believable reasons for his behaviour and I have to say she completely pulled it off.

Dameon is a complex character but he has a reason for everything he does. It's not always a good reason and it doesn't make his mean behaviour any more acceptable but it does make it understandable. He's just trying to do right by his sister and the rest of his people, he doesn't want to make the same mistake that his brother did and he's terrified of his feelings for Katy. I was glad to see that it upset him when he hurt her and I definitely feel more invested in the outcome of their relationship now I've seen how deeply he cares. I'm still glad that Katy calls him out for his behaviour though and he'd better have had an attitude adjustment when I start reading Onyx but I now love his character more than ever.

It's actually been a long time since I read Obsidian, so long that I'd forgotten most of what happened in it, which meant that reading Oblivion was almost like reading a completely new book and that made it even better. I'm not sure I'd have enjoyed this as much as I did if I'd read it immediately after the first book but after a long year gap I loved it. It reminded me how much I loved the first two books and made me excited to carry on reading the series (yes sadly I never did get past the first book and the prequel, even though I pre-ordered every single book in the series that released over the last four years!). It was fun being back in this world and I'm excited to finally find out how it all ends!

Just for readers information if you buy the print copy of Oblivion you'll only receive the first story retold from Daemon's point of view but if you buy the ebook version you'll actually get to read the entirety of the first three books (Obsidian, Onyx and Opal) so that's something to consider when you're deciding which version to purchase. I've only read the first story so far but I did buy the kindle version (even though I received a review copy of the paperback from the publisher) so I may come back and update this review later if I go on to read the next two parts.