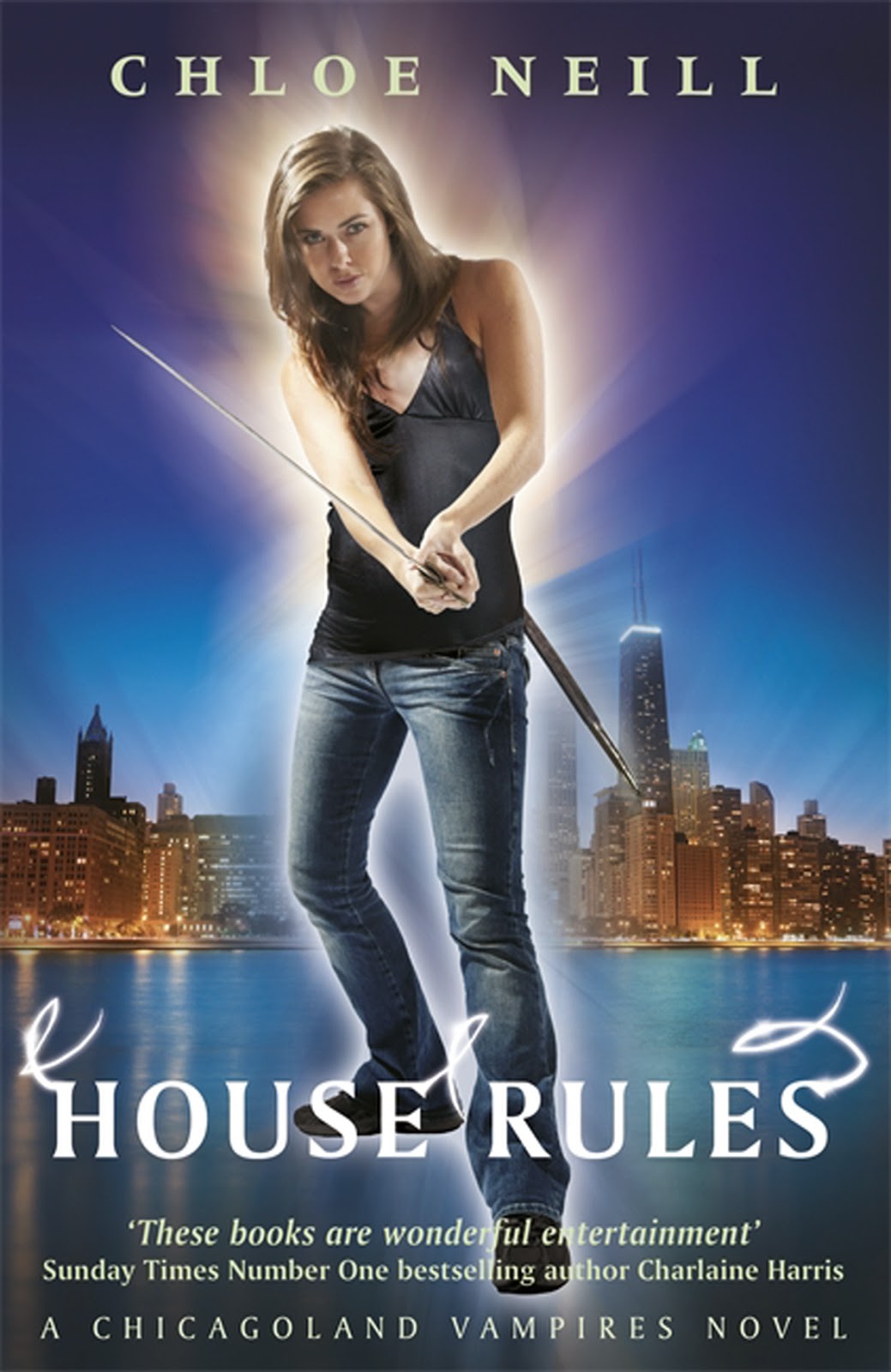 In a city full of vampires, trouble never sleeps.

At the tender age of 27, Merit became a sword-wielding vampire. Since then, she's become the protector of her House, watched Chicago nearly burn to the ground, and seen her Master fall and rise. Now she'll see her mettle - and her metal - tested like never before.

It started with two . . . Two rogues vanishing without a trace. Someone is targeting Chicago's vampires, and anyone could be next. With their house in peril, Merit and her Master, the centuries old Ethan Sullivan, must race to stop the disappearances. But as they untangle a web of secret alliances and ancient evils, they realise that their foe is more familiar, and more powerful, than they could ever have imagined.

Review:
I'm going to assume that anyone reading this review has already read the first six books in the series so although this will be spoiler free for House Rules it will probably contain spoilers for the earlier books. If you are new to the series it's one I'd highly recommend but please don't read beyond this paragraph because you really do need to read the books in order starting with Some Girls Bite.

After the revelations at the end of Biting Cold I knew things were going to get even more interesting in this book and I wasn't disappointed. Cadogan House have decided to opt out of the Greenwich Presidium and stand alone but as you can imagine the GP aren't going to let them go easily. As the countdown to the split begins the GP make their presence known in Chicago and they really put the pressure on Ethan and the whole of Cadogan House to change their minds. As if that wasn't enough for Merit to worry about she is also asked to investigate the disappearance of two rogue vampires. Cadogan are trying to form alliances with the rogues since they'll all be in the same boat soon so they can't turn down the request for help even though the timing couldn't be worse. Can Merit figure out who is behind the attacks before they move on to targets even closer to home?

There really is so much going on in this book and it had me gripped from beginning to end. The GP are so sneaky in the way they go about things and it isn't going to be easy for Ethan, Merit and the others to find a way to fight them at their own game. They are threatened with losing everything and it looks like their decision to leave the GP could have been a mistake after all since it has earned them some powerful enemies. Neither Ethan nor Merit are the type of characters to back down from a challenge though and they definitely aren't going to be forced into changing their minds due to the GP's underhand tactics. If they can't win by playing fair then they're just going to have to play dirty too and thankfully they have a few tricks of their own up their sleeves. There are also some very interesting developments when it comes to Merit and the Red Guard. I've been fascinated by Jonah since he first appeared in the series so I enjoyed seeing more of him here and I can't wait to see the knock on effects that Merit's choices will have in the future - there are bound to be some unexpected ones!

Merit and Ethan's relationship has never been particularly smooth and there are definitely forces at play trying to keep them apart in House Rules. Thankfully they are both now more secure in their relationship and although they hit a few bumps along the way they managed to deal with them much faster than they would have in the past. We get to see both Merit and Ethan show a little of their jealous sides but we also see them talk things through like adults and actually learning to make compromises together. I never once felt that they wouldn't be able to work through their issues and come out stronger on the other side and it's nice to finally seem them in a better place in their relationship.

I think it was the action I loved most in House Rules, there is just so much going on but it never got confusing. Chloe Neill wove the different plots together brilliantly and gave us a little of everything - mystery, action, romance and of course the humour fans of the series have cone to expect. It was nice to catch up with some of the other side characters too, Jeff and Catcher had a bit more page time in this than they had in the previous book but we also get to spend time with Mallory who is still working for the shapeshifters as she pays her debt to society. I was really pleased with how realistic Mallory's interactions were with both Merit and Catcher. Mallory was Merit's best friend for so many years and she still loves her in spite of the things she has done but that doesn't mean she can trust her. They both want to rebuild their friendship but they also understand that it is going to take time and even then they may never get back to where they were before Mallory went off the rails. I think one of the things I love most about this series is how many layers there are to all of the characters, even the side characters have depths to them and it makes spending time with them even more enjoyable. I'm really happy that this series is still going strong and I'm looking forward to finding out what happens next.