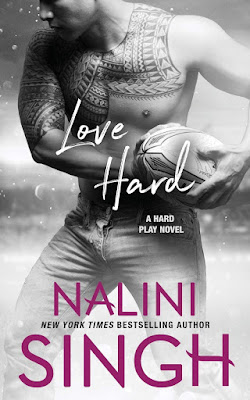 Jacob Esera, star rugby player and young single father, has worked hard to create a joyous life for his six-year-old daughter. After the death of his childhood sweetheart soon after their daughter’s birth, all Jake wants is safety and stability. No risks. No wild chances. And especially no Juliet Nelisi, former classmate, scandal magnet, and a woman who is a thorn in his side.

As a lonely teenager, Juliet embraced her bad-girl reputation as a shield against loneliness and rejection. Years later, having kicked a cheating sports-star ex to the curb, she has a prestigious job and loyal friends—and wants nothing to do with sportsmen. The last thing she expects is the fire that ignites between her and the stuffed-shirt golden boy who once loved her best friend.

Review:
He's a star on the rugby field but Jacob Esera's main focus has always been his family, especially his six-year-old daughter Esme. Jake has been a single father since his childhood sweetheart Callie died not long after Esme was born and it hasn't been easy but with the help of his family he's made it work and become a wonderful father. He's been so focused on Esme that he's forgotten how to unwind and have fun as an adult so when Juliet comes barrelling back into his life she's like a breath of fresh air.

Unlike Jake, Juliet never had the support of her family, in fact the only person she was ever able to rely on was Callie who was her best friend throughout school. Jake and Juliet were like chalk and cheese and never really got along but their love for Callie bonded them until bad girl Juliet was sent to Samoa to live with family. It's been years since they saw each other last and sparks start to fly the moment they meet again but they're both wary about getting into a relationship. Jake is scared to love again because he can't bear the thought of losing someone else while Juliet has been hurt before when her ex betrayed her and is totally off men in general but sports stars in particular. Destiny has a way of throwing them back together though and in the long run neither of them are able to resist temptation.

I absolutely love all of the Bishop-Esera brothers, Gabriel has always been my favourite (and we get to see the T-Rex make an honest woman of his mouse in this book as the story starts with their wedding!) but Jake came very close to topping him. In general I tend to prefer my romances child free but there was something so adorable about Esme that I enjoyed her role in the story. The main thing that kept me hooked was the chemistry between Juliet and Jake though. Their relationship is like throwing a lit match on a can of oil, they're argumentative and often clash but when they're on the same page it's absolutely explosive.

The two of them were seriously hot but there were also some really sweet emotional moments between them. I loved that Callie felt like a part of their story too, she was such an important person in both of their lives and it kind of felt like she was somehow responsible for bringing them together. We get to spend time with the whole clan and I don't think I'll ever get enough of this family. I'm already looking forward to Danny's book and hope we'll get stories for some of the other rugby team members after that. Nalini Singh can do no wrong in my eyes, I'm a paranormal girl at heart so I'll always love the Guild Hunter and Psy-Changeling series but her contemporaries always hit the spot too and leave me with a happy buzz.