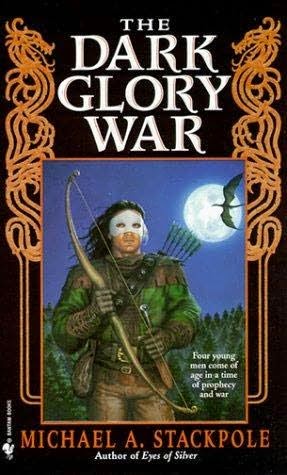 The Dark Glory War is a thrilling new tale set in a world threatened by an unstoppable foe . . .

In the sacred season of the Moon Month, four young men don the masks that herald their coming-of-age celebration, a time of testing, ritual, festival, and romance.

But for Tarrant Hawkins and his friends Leigh Rounce, and Nay, their first test becomes a desperate struggle for survival. For they will encounter the vanguard of an invasion force poised to overrun their homeland of Oriosa, and all four will find their lives changed forever when they encounter a legendary weapon that brings its weilder invincibility. Yet the magic sword may prove more curse than blessing, signalling the arrival of a cataclysmic battle with ancient foes. And in the face of dire sorceries and terrible battles, these youths will come to manhood . . . or to death.

Review:
I've not read anything by Michael A Stackpole before but I was in the mood to start a new epic fantasy series and the DragonCrown War Cycle came highly recommended by my friend Cory. In fact she raved about it so much that several of us decided to buddy read this! I found The Dark Glory War to be a likeable read but unfortunately it didn't wow me as much as I expected it to and although I've already bought the rest of the series I don't find myself in any kind of rush to carry on reading them.

There is a lot to like about the book though and I found the idea of the masks quite an interesting one. All adults from Oriosa wear a mask when they're in public, the mask isn't so much to hide their identity (although it does that to a certain extent) but it is used to show their achievements and they add marks and embellishments to them as they achieve certain goals or to show their allegiances. It's used a bit like a badge of honour and I enjoyed seeing the ways that characters added to their masks throughout the story. I also liked the main character Tarrant, he's an honest and trustworthy guy who just wants to do right by the people he cares about. He is pulled into a horrible situation and does a good job of rolling with the punches and he grows a lot through out the story as he faces his worst nightmares.

While I did enjoy the story I found it quite a slow read. I can't even put my finger on why that is because I can't think of anything I actively disliked but I just didn't feel as hooked as I should have done. As much as I liked Tarrant and I want to know what happens to him most of the other characters came across as fairly one dimensional and I don't particularly feel invested in the outcome of their stories. The book is well written and I enjoyed both the action scenes and world building so it is a series I'll be continuing at some point in the future but it's not one I'll be jumping back into immediately.