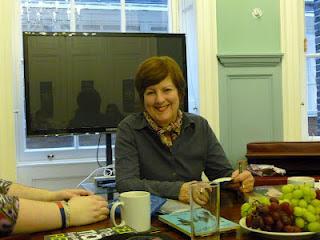 Celia Rees
I'm very late posting about this event but I thanks to Bloomsbury I had the pleasure of meeting Celia Rees back in March to celebrate the launch of her latest novel This Is Not Forgiveness (this is an awesome book & you can read my review here if you haven't already read it). I was completely useless that day and forgot to take my camera with me so thanks to Viv for letting me use the above photo of Celia (Viv has included lots more pictures in her write up which you can read in full here).

It was a pleasure to meet with Celia and talk to her about This Is Not Forgiveness and her writing career. I may not have taken pictures but I did take lots of notes so here are some of the things that we talked about:
Celia was absolutely lovely to talk to and happily answered all of our questions. It was great to meet her and I'd definitely recommend you check out This Is Not Forgiveness if you haven't already. I'm actually looking forward to working my way through some of her back list - I'm particularly interested in trying Witch Child which a lot of other bloggers were raving about during the event.

I'd like to say a massive thank you to Emma at Bloomsbury for inviting me to the event and for spoiling us all with cakes, nibbles and books!