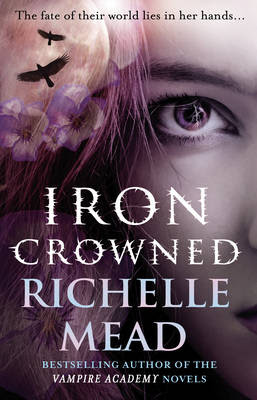 An embattled realm mystically entwined with her own, the Otherworld is at the mercy of one woman . . .

Shaman-for-hire Eugenie Markham is the best at banishing entities trespassing in the mortal realm.  But as the Thorn Land's queen, she's fast running out of ways to end the brutal war devastating her kingdom.  Her only hope: the Iron Crown, a legendary object even the most powerful fear . . .

But who can she trust to help her?  Fairy king Dorian has his own agenda.  And Kiyo, her shape-shifter ex-boyfriend, has every reason to betray her.  To control the Crown's all-consuming powers, Eugenie must confront an unimaginable temptation - one which puts her soul and the fate of two worlds in mortal danger . . .

Review:
I really enjoyed the first two installments of the Dark Swan series but I found myself getting really frustrated as I was reading Iron Crowned.  Eugenie makes some seriously bad decisions and there were times I was about ready to strangle her!  I'm getting really annoyed that she refuses to accept her role as queen of the Thorn Land, her people are suffering because she won't step up to her responsibilities and it's about time she grew up and did the right thing.

I've also had enough of the love triangle and starting to wonder just how many times Eugenie will jump back and forth between Dorian and Kiyo.  Dorian behaves badly in Iron Crowned and while I don't blame her for being angry I didn't like the fact that she goes running straight back to Kiyo before even talking to him to get his side of the story.  I've gone from really loving Kiyo in the first book to completely despising him now, his actions in Iron Crowned made me want to punch him!  I don't think Dorian is much better though so at the moment I'm not routing for either one of them.  I'd rather see Eugenie on her own and learning to become a decent queen.

I am curious to see if Eugenie can redeem herself in the next installment though and although I saw the twist at the end coming it should make things interesting as the series progresses.  Unfortunately this wasn't my favourite book in the series but I'm hoping things will improve again from here onwards.