Back in February I got to go to the book launch for The Book of Wonders by Jasmine Richards and Oliver Twisted by JD Sharpe. In case you're wondering Jasmine and JD aren't two different people - they are just two different hats worn by author Jasmine! I first met Jasmine last year when she was wearing yet another persona - that time as an editor for OUP (Oxford University Press) where she introduced us to both Joss Stirling and Dave Cousins (read all about that event here). At the time she had mentioned that her middle grade debut novel The Book of Wonders was being published in the US in January so obviously that book has been on my wish list ever since. She'd managed to keep the release of her debut YA novel Oliver Twisted (published in the UK by Egmont in February) a secret though. It wasn't until a couple of days before the event that Kirsty (from The Overflowing Library) told me that both books were written by Jasmine - I can be a little slow on the uptake sometimes!

Anyway, I had already read and enjoyed Oliver Twisted but hadn't been able to get hold of a copy of The Book of Wonders (it was constantly out of stock on Amazon and The Book Depository) but I was looking forward to the event and getting to chat with Jasmine again. Luckily Daunt Books had ordered in a stash of both books so I was able to snag a copy of The Book of Wonders and get both books signed on the night. 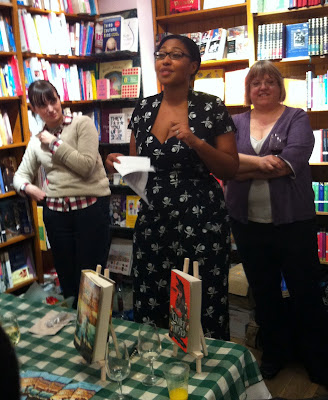 Jasmine Richards / JD Sharpe
(Check out her super cool skull and crossbones dress - I really should have asked her where she got it because I want one!)
It was a lovely event and it also happened to be Jasmine's birthday so we got to help her celebrate which was nice. She read a section from both books, although she had to change the Oliver Twisted reading because there were some very young people in the audience and it's a very gory book!

Along with chatting to Jasmine I got to catch up with a few other bloggers which is always good and we were able to do a bit of star spotting of other authors in the crowds.  If I'd known who would be there I could have taken quite a few extra books for signing! We managed to have a quick chat with Dave Cousins, Sarwat Chadda and Jon Mayhew but I also spotted Michelle Harrison in the room and I'm sure there were others that I missed. 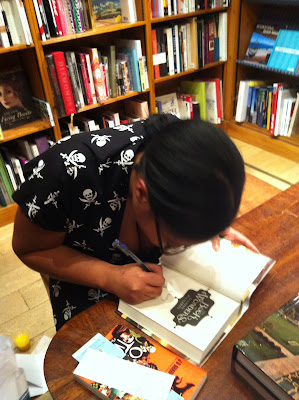 Jasmine signing my books
We had a great time at the event so I'd like to say a massive thanks to Jasmine for inviting us and a massive congratulations on the publication of her two debut novels!

Here is a bit more information about both of the books: 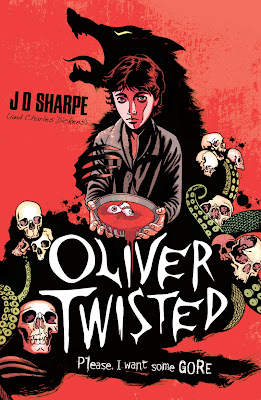 If you think you know Oliver Twist, think again

"FLESH" the woe-begotten moaned at Oliver, baring teeth which were ragged and black.

"FLESH" came another moan, and he turned to see two more behind. They began to shuffle towards him barefoot - toes blue from cold, arms outstretched.

The world according to Oliver Twisted is simple. Vampyres feed on the defenceless, orphans are sacrificed to hungry gods and if a woe-begotten catches your scent it will hunt you forever.

When a talking corpse reveals that Oliver will find his destiny in London, he sets out to seek the truth. Even if it means losing his soul . . .

I will be posting my review of Oliver Twisted later today. 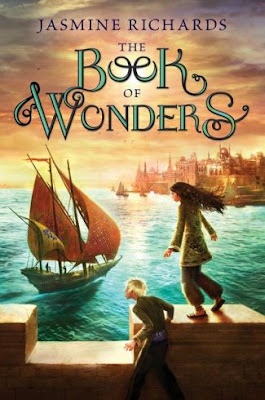 Magic, Djinn, Ogres, and Sorcerers. Thirteen-year-old Zardi loves to hear stories about fantastical beings, long banned from the kingdom of Arribitha. But anyone caught whispering of their powers will feel the rage of the sultan—a terrifying usurper who, even with his eyes closed, can see all.

When her own beloved sister is captured by the evil ruler, Zardi knows that she must go to any lengths to rescue her. Along with her best friend, Ridhan—a silver-haired, violet-eyed boy of mysterious origins—and an unlikely crew of sailors led by the infamous Captain Sinbad, Zardi ventures forth into strange and wondrous territory with a seemingly impossible mission: to bring magic back to Arribitha and defeat the sultan once and for all.

I haven't had time to read The Book of Wonders yet but I'll get my review posted as soon as possible - in the meantime you can check out the book trailer below: