Today I thought I'd share the book trailer for Heather Burch's debut novel Halflings. The book was released in January and it's one I'm looking forward to reading soon.

Here is the full book blurb in case you haven't seen it: 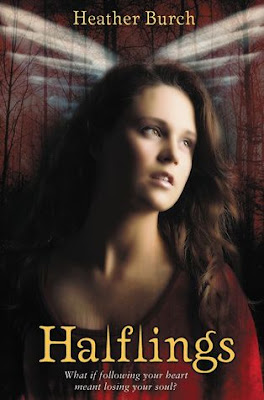 After being inexplicably targeted by an evil intent on harming her at any cost, seventeen-year-old Nikki finds herself under the watchful guardianship of three mysterious young men who call themselves halflings. Sworn to defend her, misfits Mace, Raven, and Vine battle to keep Nikki safe while hiding their deepest secret—and the wings that come with.

A growing attraction between Nikki and two of her protectors presents a whole other danger. While she risks a broken heart, Mace and Raven could lose everything, including their souls. As the mysteries behind the boys’ powers, as well as her role in a scientist’s dark plan, unfold, Nikki is faced with choices that will affect the future of an entire race of heavenly beings, as well as the precarious equilibrium of the earthly world.

If you like ebooks you might want to download the free illustrated prequel short story. This short story is called 11:15: The Making of a Halfling and can be downloaded from Amazon UK (I'm sure it is available in other formats but I haven't investigated) 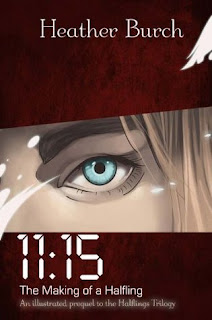 In this illustrated prequel to the Halflings trilogy, written by Heather Burch, Mace and Raven are given a mission to stop a catastrophic event. With his halfling abilities still untapped, Vine is allowed to join the mission, but only as a spectator. The clock is ticking and the tragedy is proving difficult to stop. Will Vine be able to sit back and watch, or will the power of heaven unleash just in time?


So what do you think?  Is Halflings on your wish list?  If you've already read it I'd love to know what you thought of it.  I'll be reading this one soon so keep an eye out for my review.
at 18:00