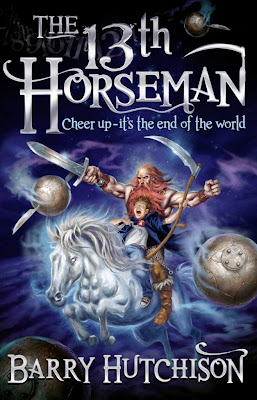 'You are no longer Drake Finn, you are the Fourth Horseman.  You are the rider on the pale horse.  You are death.'

Drake is surprised to find three Horsemen of the Apocalypse playing snakes and ladders in his garden shed.  He's even more surprised when they insist that he is one of them.  They're missing a Horseman and think Drake is the boy for the job.  Does being in charge of Armageddon have to spell the end of the world?

Barry Hutchison blends riotous comedy with heart-stopping action in this richly imagined fantasy adventure.  He isn't worried about the Apocalypse, as long as it doesn't come before tea.

Review:
After an unfortunate incident at school Drake finds himself expelled and is forced to move house to be nearer to his new school.  The last thing he expects to find in his new garden shed is three of the Horsemen of the Apocalypse - War, Famine and Pestilence - sitting around playing board games.  Even stranger is the fact that they are convinced that he is their newest recruit, the replacement for Death.  The old Death apparently got bored of waiting for the Apocalypse to start so he quit and decided to go off on his own to bring about the end of the world.  It is up to Drake and the other Horsemen to stop him from succeeding.

Not being much of a horror fan I haven't read any of Barry Hutchison's Invisible Friends books even though I've heard great things about the series.  I am a massive fantasy fan though so couldn't wait to pick up The 13th Horseman.  Now I'm just left hoping that this is the start to a new series because I haven't laughed so much in ages.  If you're a fan of comic fantasy then The 13th Horseman is a MUST read for all ages and one I can't recommend highly enough!

The story is action packed, full of humour and was one I could easily have read in one sitting.  I loved the author's take on the Horsemen, he really brought all three of them to life but I have to confess to being a particular fan of Pestilence.  You can't not laugh when the Horsemen are on the page playing board games and make sure you watch out for Famine's horse!

While I wouldn't compare the story to the Discworld books I would say that Barry Hutchison has a similar ability to Terry Pratchett in finding the absurd in everyday situations and twisting things to make them hilarious.  If you want to get a feel for the style of the book make sure you check out Pestilence's diary on The 13th Horseman website and if you enjoy that you'll love the book.  Although I'm still not quite brave enough to try his horror series I will definitely be keeping an eye out for more fantasy books from Barry - they'll be going straight to the top of my wish list.