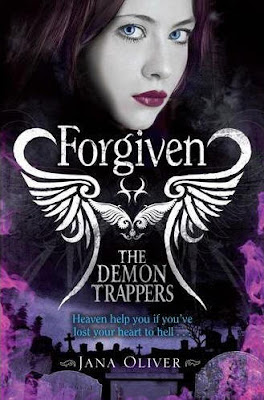 The stakes are high when you bet on your soul . . .

Hell's finest are ruling the streets and it seems that Armageddon might be even closer than Riley Blackthorne imagined.  But with her soul and her heart in play it's all she can do to keep herself alive, let alone save the world. Riley's not afraid of kicking some major demon butt, but when it comes to a battle between Heaven and Hell, she might need a little help . . .

Review:
Poor Riley hasn't had the easiest time of things recently and as both Heaven and Hell seem to have their sights set on her it doesn't look like it's going to get better any time soon. She is struggling to cope with the betrayals of both her ex-boyfriend Simon and Ori who lied to her about everything so she doesn't know who she can trust or where to turn. At least her father is safe with Mort and her best friend Peter is there when she needs him. As she comes under investigation from the Church Hunter's who think she has allied herself with Hell Riley is determined to solve the mystery of the fake Holy water to help prove her innocence. With Armageddon just around the corner can Riley work out just what she needs to do to prevent the end of the world?

If you've read my reviews for Forsaken (US title: The Demon Trapper's Daughter) or Forbidden (US title: Soul Thief) then you'll already know how much I love this series. It's by far one of the best YA paranormal series that I've read so I couldn't wait to get started on Forgiven. Thankfully Jana Oliver didn't disappoint me and this was the best book yet! There is literally so much going on in this series that the books are almost impossible to put down when you've started them. I don't know how I'm going to survive the wait until August for the final book Foretold!

Riley is a fantastic heroine and a character that I love. She isn't perfect and makes mistakes (I think most of us were shouting at the pages telling her not to do what she did with Ori at the end of the second book!) but that just makes her easier to relate to. She has done a lot of growing up since the series began and it's good to see her gaining confidence in her abilities. There are some absolutely heart breaking scenes with Riley and her Dad in this book and they really showed just how far she has come in the last couple of months.

I love the fact that Riley has a strong and supportive friendship with Peter but that there is no hint of a romance between them. I'm sick to death of the best friend who is madly in love with the heroine while she doesn't notice him that way so it's good to find a series that breaks away from that. Riley is currently caught between good and evil owing a favour to both Heaven and Hell but everyone is keeping secrets from her. The more she uncovers the more everything changes from black and white and into shades of grey and the harder it is to decide who really has her best interests at heart. I really don't know if I should be routing for the angels or the demons at this point!

I've said before how much I adore Beck and I'm going to say it again! I can't get enough of his character and love that we get to see part of the story from his point of view. The developments in his relationship with Riley had me jumping for joy - they make such a cute couple and I need to see them end up together. We learn a few shocking things about Beck's past in Forgiven but at the moment we have been left with more questions than answers about what he is hiding. I'm desperate to see how things play out - especially now we've started to see Justine's true colours (I did try to warn you Beck!).

This really is a series that I can't get enough of and one that I would highly recommend to anyone looking for an action packed story with a kick ass heroine, a hero to swoon over and a plot with more twists and turns than a roller coaster. I can't wait to get my hands on Foretold!