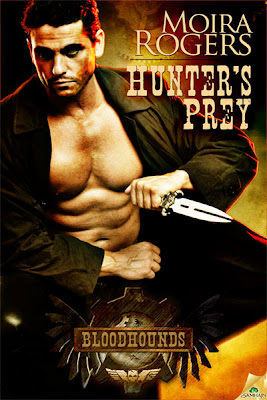 Ophelia retired from life as a prostitute, but her new position is even more complicated. Managing the bloodhound manor in Iron Creek is difficult and time-consuming, a job she enjoys less with each passing day. Then there's her inconvenient attraction to Hunter. The newly turned hound seems eager to enjoy her company, but wary of anything more intimate.

Having survived the violence of his first full moon out of a cage, Hunter isn't looking forward to his first new moon. Ophelia offers to be the woman who sates his needs during the three long days of sexual fury, but he can't abide the thought of hurting her in a state of mindless lust. Especially since she longs to settle into a respectable life, and his needs are anything but respectable.

Their mutual goal is simple: avoid entanglements. It's a solid plan, at least until a vampire drug lord and a couple of nosy Guild representatives force them to work together to defend their friends and everything they hold dear--including each other.

Warning: Contains a mostly feral, vampire-hunting hero and a tough survivor of a heroine whose retired-hooker heart is more steel than gold. Also included: dangerous frontier intrigue, fancy brothels, mad-scientist weapons and a good dose of wicked loving in an alternate Wild West.

Review:
Hunter was turned into a Bloodhound against his will and kept prisoner by those who made him.  Rescued by Wilder and Satira he is now facing his first new moon out of a cage and he is dreading the urges that it will bring.  There is only one woman he is interested in but he hates the idea of not being in control and worries that he might hurt her.  Ophelia is a retired prostitute who has taken over running the home the bloodhounds live in.  She has plenty of experience with Bloodhounds in the throws of new moon lust but her offer to help Hunter through is about more than that.  She is drawn to him like no other but doesn't know if there can be a future between them - especially when he seems to push her away at every opportunity.

Ophelia hasn't had an easy life and was forced into prostitution to survive but she has no shame over her past, as a practical woman she knows she just did what she had to do and she won't let anyone make her feel bad about that.  Now that she has retired she has accepted a job from her best friend Satira running the bloodhound household but she is finding it hard to deal with the constant demands.  All she really wants is some peace but she doesn't want to let her friend down by leaving her in the lurch.

Hunter was born to a wealthy family but hadn't made much of his life before he was taken prisoner.  He is struggling now to reconcile the person he was before with the monster he believes he has been changed into.  He hates the way he feels now and loathes the idea of not being 100% in control of his actions when the moon calls to his Bloodhound side.  I felt that Hunter was the most gentlemanly of the Bloodhounds we've met so far but that all changes when the new moon brings out his wilder side.  He was surprisingly dominant in the bedroom but you won't hear Ophelia complaining because she enjoys every second of it!  I loved the fact that he always treated Ophelia with respect and never once made an issue of her past, he wanted to court her properly and win her heart.  I thought the pair of them were a great match and I loved the way that Ophelia helps Hunter to accept the person he has become.

Alongside the romance it was great to get to see Wilder and Satira and find out how they are doing.  We get to see more of Archer which has me extra excited about reading his story when it comes out later this year.  We see some of the after effects of the changes forced on Nate in the first book and how he is struggling to accept his new condition - I really hope we're going to see more of his transition later.  We are introduced to a couple of new Bloodhounds who have been sent by the Guild to check up on Wilder and the others - possibly new heroes for future books (fingers crossed!)?  There are also some great action scenes as Hunter and the others investigate an influx of drugs into their border town - could the vampires be behind it all and if so why?  Moira Rogers can certainly pack a lot into a novella!  If you haven't started this series yet then I'd highly recommend starting with Wilder's Mate and if you enjoy that one you'll love Hunter's Prey even more.  I can't wait for Archer's Lady to release in July!