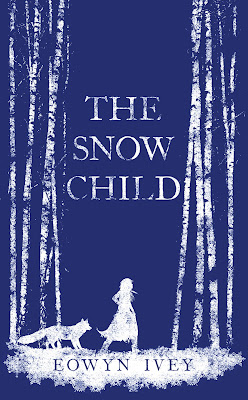 November 1920
Jack and Mabel have staked everything on making a fresh start for themselves in a homestead 'at the world's edge' in the raw Alaskan wilderness.  But as the days grow shorter, Jack is losing his battle to clear the land, and Mabel can no longer contain her grief for the baby she lost many years before.

The evening the first snow falls, their mood unaccountably changes.  Mabel surprises herself by throwing a snowball at her husband; then, in a moment of tenderness, the two build a snowman - or rather a snow girl - together.  The next morning, all trace of her has disappeared, and Jack can't quite shake the notion that he glimpsed a small figure - a child? - running through the spruce trees in the dawn light.  And how to explain the little but very human tracks Mabel finds at the edge of their property?

Written with the clarity and vividness of the Russian fairytale from which it takes it's inspiration, The Snow Child is an instant classic - the story of a couple who take a child into their hearts, all the while knowing they can never truly call her their own.

Review:
Before I start my review I want to point out that this isn't the kind of book I usually read so perhaps that would explain why I didn't love it quite as much as so many others have.  I did still like the story but it didn't wow me the same way it did most of my friends who have read it.  The story is based on a Russian fairy tale but it isn't one that I was familiar with so I won't be making comparisons between them.

Set in the 1920s The Snow Child tells the story of Mabel and Jack who move to Alaska hoping for a fresh start.  They married late in life and after suffering a still birth they were never blessed with more children.  It isn't easy to settle into life in the wilderness, the harsh weather makes for difficult living conditions and life is more lonely than they were expecting it to be.  When the first snow arrives the couple build a snow child but the next morning their creation has disappeared.  Strangely there are tiny footprints walking into the woods and Jack is sure he spotted a small child in the forest.  As the couple slowly get to know the almost feral child who appears to live on her own in the mountains they also find themselves settling into their new life.  They are happier than they have been in years and even begin to make friends with their neighbours.

The story is beautifully written and so descriptive that you feel like you've stepped into Jack and Mabel's world.  In fact every time I stopped reading to glance out of the window I was surprised not to see snow!  Eowyn Ivey has really captured the harsh beauty of the Alaskan wilderness, it's not an easy place to survive thanks to the fierce weather conditions but there is a pure beauty about it that makes you long for more simple times and want to be at one with nature.  This is one of those books where the setting is the main character and it was the one I was most connected to.

My problem was that I never really felt I got to know Mabel and Jack well and I didn't feel invested in their story.  Whenever I picked up the book I enjoyed reading it but when I put it down it was easy to be distracted by other things and I never felt compelled to pick it up again.  The fact that it took me 8 days to read the book (even though I read 6 other books during the same period and I'm someone who never usually reads more than one book at a time) shows that.  Like I said this isn't the kind of book I usually read though so don't let me put you off giving it a try.  It was still an enjoyable read and I think anyone who likes this type of story will love it.