Review: The Rising - Will Hill 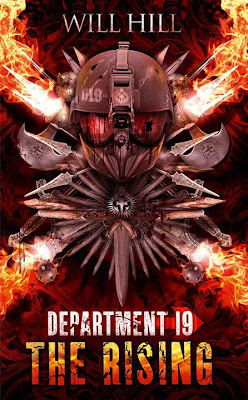 The policeman looked round at the dimly lit road.  On the factory wall opposite, in black paint that had dripped all the way to the tarmac, someone had sprayed two words:

After the terrifying attack on Lindisfarne at the end of the first book, Jamie, Larissa and Kate are recovering at Department 19 headquarters, waiting for news of Dracula's stolen ashes.

They won't be waiting for long.

Vampire forces are gathering.  Old enemies are getting too close.  And Dracula... is rising.

Review:
It's no secret that Department 19 was one of my favourite books of 2011 so I couldn't wait to get my hands on the second book in the series The Rising. Although this was one of my most anticipated novels of the year I couldn't help feeling a little nervous when I picked it up to start reading - what if it didn't live up to my expectations? I'm glad to be able to say that I wasn't disappointed and if Department 19 was a 5 star read (which it was!) then The Rising is a 10 star one! I'm going to assume that anyone reading this review will have already read the first book so please be aware that this will contain spoilers for Department 19 - I will be careful not to give spoilers for The Rising though! If you haven't read the first book yet stop reading this review now and go out and buy it - I can't recommend this series highly enough!

The attack at Lindisfarne at the end of the first book has had huge ongoing consequences for all of the characters we know and love. Jamie may have built quite a reputation for himself amongst his colleagues by killing one of the oldest and strongest vampires in the world but he is devastated by the loss of his friend Frankenstein. He feels guilty that he wasn't able to save him and is also worried about the changes in his mother. Jamie is lucky to have strong bonds with Larissa and Kate though and they have been helping him cope. I love Jamie for how normal he is, despite the fact that he works for a secret organisation hunting down vampires for a living he is just a 17 year old boy and can be quite a moody one at that. His relationship with Larissa is going well but keeping things a secret is adding extra pressure on both of them and Larissa has her own issues to deal with.

I really enjoyed getting to see more of Kate and Matt too. Since Lindisfarne Kate has signed up to be an Operator and is working in a team alongside Jamie and Larissa. The three of them work really well together and it was good to see a friendship between them all that didn't include some kind of love triangle. Matt returned home after recovering from his attack in the first book but found it impossible to settle back into a normal life. He may be Jamie's opposite in a lot of ways but he is a great addition to their team and I can see him having an important role in the future.

All of the characters have some heart wrenching, emotional decisions to make throughout the story and it was good to see how much they have all grown since we first met them. There has been some serious character development but that doesn't mean there is less action though, in fact the plot progresses at breakneck speed and with more twists and turns than a roller coaster! Be prepared for some absolute shockers - I had to pick myself up off the floor a couple of times. The story takes you around the UK and Europe as well as on a road trip across the US as we follow the Department 19 crew and a few new characters. There will be betrayals from people we trust, surprising new allies and a couple of shock appearances as the Department prepares for the rise of Dracula. The countdown has begun but are you prepared for the consequences?

If you loved Department 19 then I guarantee that you'll love The Rising even more. Will Hill has managed to top the first book in every way and the only disappointment is that I don't have book 3 yet! This series is a must for anyone who wants a gruesome, action packed story full of old style terrifying vampires who in most cases will kill you as soon as look at you.