Review: All Wrapped Up for the Holidays - Anthology 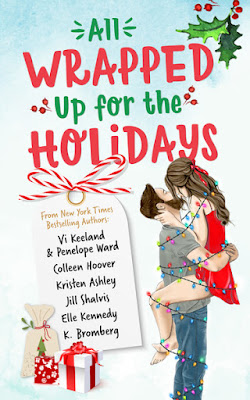 The Merry Mistake by Vi Keeland and Penelope Ward

Note to self: Ask Santa for glasses this year. When I accidentally mistook a gorgeous man resting outside my building for a homeless person in need of lunch, we got into it. I’d only been trying to do a good deed around the holidays, but he called me righteous. I called him something far worse. If only I didn’t have to see him again. But fate had other plans.

A short story that brings back several of Colleen’s most beloved characters. Told from the point of view of Daniel from Finding Cinderella, readers will finally get the story they’ve been begging for more of. For the best reading experience, make sure you’ve read all three books that come together to make up this heartwarming and fun holiday short story; Finding Cinderella, Hopeless and All Your Perfects.

What's Christmas with the Starks like? Get a peek into the Rock Chick world and how Luke copes with Ava going Christmas gaga and just what he will, and won't, do for his girls during the holidays.

Just Say When by Jill Shalvis

When the one you want …

Is the one you can’t seem to have…

Can love conquer all?

The Pact by Elle Kennedy

Thanks to my hectic schedule as a pro hockey player, my girl and I are spending more time apart than together. Luckily, I have a solution—a romantic New Year’s Eve getaway in the mountains, just me and Grace and plenty of sexytimes. Except this blizzard has other ideas...

The Package by K. Bromberg

Christmas week can’t get any worse for Jules Jilliland. Dumped by her boyfriend, rear-ended on the freeway, and fired from her job, she finds herself stuck in an elevator with a handsome stranger. When their packages are accidentally swapped, will it end up being a misfortunate accident that suddenly brightens her holidays?

For more information about any of these authors you can visit their websites by clicking the links below:
Vi Keeland
Penelope Ward
Colleen Hoover
Kristen Ashley
Jill Shalvis
Elle Kennedy
K Bromberg

Review:
All Wrapped up for the Holidays is a collection of six short stories offered for free to fans of the authors involved. You can download your copy via BookFunnel here for a limited time.


The Merry Mistake by Vi Keeland and Penelope Ward

I've heard great things about both Vi Keeland and Penelope Ward but this is the first time I've read one of their books. I'm not sure if The Merry Mistake is linked to any of their other books but it worked perfectly as a stand alone. It's a really cute romance between Piper and Mason, two characters who meet when Piper mistakes Mason for a homeless man and buys him lunch. He is rather insulted by her assumption and calls her a self-righteous do-gooder so they don't get off to the best of starts! However fate has a way of throwing them back together and they find they have a lot more in common than they could have imagined.

I really enjoyed this one, it was the right amount of sweet without being over the top, there was a good amount of humour and both characters were extremely easy to like. I definitely plan to check out more books from both of these authors in the future.

Colleen Hoover recommends reading this story after her books Finding Cinderella and All Your Perfects so, since I've not read either of those books yet I skipped this one. I will come back and update this review at a later date when I get around to reading it though.

This story is about characters from Kristen Ashley's Rock Chick series. I did try to read it but there were so many different names dropped in the first few pages that I was totally confused. I'm sure this is brilliant for fans of the series who get to catch up with familiar characters but it didn't really work as an introduction to the world so I didn't even finish reading it. Again I'll come back to it at a later date if I ever read the Rock Chick books.


Just Say When by Jill Shalvis 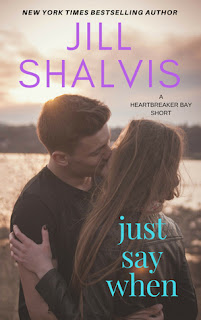 Heartbreaker Bay Series:
Sweet Little Lies
The Trouble with Mistletoe
One Snowy Night (Novella)
Accidentally on Purpose
Chasing Christmas Eve
Holiday Wishes (Novella)
About That Kiss
Hot Winter Nights
Just Say When (Short Story included in the All Wrapped Up for the Holidays anthology)
Playing for Keeps
Wrapped Up in You
Twist of Fate (Novella)

Just Say When is part of Jill Shalvis' Heartbreaker Bay series so I'm sure anyone who has read this series will already be familiar with the characters involved but I'm happy to say it's still a really enjoyable read even if you're new to the series.

James and Julia have been dating for several months but he's becoming increasingly frustrated by the way she always sneaks out of his bed in the middle of the night. He wants more from their relationship but he's scared to push her as he knows she's been hurt before and it's made her gun-shy. I won't say any more than that but I thought these two made an adorable couple and I really enjoyed seeing them figure out what they both want from the future. I hope we get to discover what happens next for them in the main series and this story has definitely given me a kick to get reading the rest of the Heartbreaker books.


The Pact by Elle Kennedy

Off-Campus Series:
The Deal
The Mistake
The Pact (Short Story included in the All Wrapped Up for the Holidays anthology)
The Score
The Goal

The Pact is part of Elle Kennedy's Off-Campus series and is all about characters Logan and Gracie who feature in the second book of the series, The Mistake. I've not actually read any of the books in that series so I was a bit worried I wouldn't enjoy this story but I couldn't have been more wrong. I loved both of these characters and reading this has DEFINITELY made me want to read the other Off-Campus books.

Logan and Grace are already a couple here but they're finding it increasingly difficult to spend time together as she's busy with her studies and he's travelling the country as a professional hockey player. This story is about putting in the effort to keep a relationship alive, it's about making time for each other even when you're exhausted and basically it's just about remembering what's important. I'm sure if you'e already read The Mistake you'll love the chance to catch up with these two but even if you're new to the characters it's still a really sweet and pretty hot read.


The Package by K. Bromberg

K. Bromberg is another new to me author that I've heard good things about but never got around to reading. I'm not sure if The Package is linked to any of her other books or series but I was able to enjoy it as a stand alone so it wasn't an issue.

This was the very definition of a meet cute as characters Julia and Archer bump into each other when they get trapped in a broken down elevator. Julia is having the worst day ever and ends up ranting about the company and her job to Archer completely unaware of the fact that he owns the company. I found both of these characters likeable and I was left feeling that they could become a great couple in the future. I did find a couple of things completely unbelievable (like her job offer and bonus cheque) but overall this was a cute and funny read.