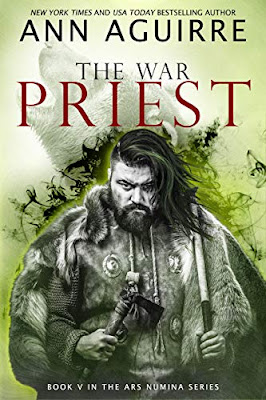 Personal tragedy drove Callum McRae to join the Order of Saint Casimir fifteen years ago; now he’s in charge of a hold he hasn’t lived in for years. Supplies are scarce, he has no knack for dealing with people, and the Gols are at the gates. To make matters worse, he’s also battling an attraction so powerful and forbidden that it imperils his very soul…

Joss Bristow seems bright and cheerful, but she’s hiding a well of sorrow that fuels her music. She’s also prone to leaping before she looks, exactly how she ends up besieged at Burnt Amber. Though she wanted to get to know Callum better, she never imagined that falling for him could cost her life.

He’s the dark of night, and she’s the sun that shines just for him. Two wounded souls have never needed each other more, but between his holy vows and the devastation of war, the odds are stacked against them…

Review:
Callum left his home fifteen years ago to join the Order of Saint Casimir as a priest and he never looked back. He certainly didn't expect to have to come back years later and take control as the hold leader in the middle of a war. The Gols are closing in and battle is looming, supplies are running low and Callum is totally out of practice when it comes to dealing with so many people. Joss is Callum's total opposite, cheerful and empathic to his cold and stoic, she knows exactly how to keep people's spirits up even in the most dire situations. She has admired Callum from afar and wants nothing more than to get to know him better but his plans to return to the priesthood are a huge barrier between them. Joss is exactly what Callum needs though and she might be the only person who can help him get through the challenges that lie ahead.

I've been a fan of Ann Aguirre's Ars Numina series since the beginning but The War Priest was definitely my favourite book so far. I absolutely loved the romance between Joss and Callum. She's such a sweet and warmhearted character while he comes across as really dour and grumpy so at first glance you wouldn't think they fit well together. You'd be totally wrong on that though because Joss is absolutely everything that Callum needs, he locked his heart away after a tragedy and has been in a kind of frozen stasis ever since but Joss's sunshine personality burns through that ice and lets her through to the warm and loving man hidden deep inside.

I loved that their relationship develops slowly, the attraction is there from the beginning but it takes time for them to build a friendship and grow trust before Callum realises that Joss is the most important thing in his life, even more so than the vows he took. Even then his vows to the Order of Saint Casimir are taken seriously, Callum respects the order and he doesn't just walk away because he has feelings for Joss. He talks about it with his brothers and requests permission to leave from the head of the order. These two are ridiculously adorable together and I was so happy with the way things turned out for them.

That isn't to say this story is all easy though. They are in the middle of a war and facing danger on all sides so there is plenty of action happening here. It was nice to see some of the previous characters make cameo appearances and there was a lot of great progress made between the different factions who are all fighting against the Gols. I'm already looking forward to the next book and can't wait to see how this series ends.