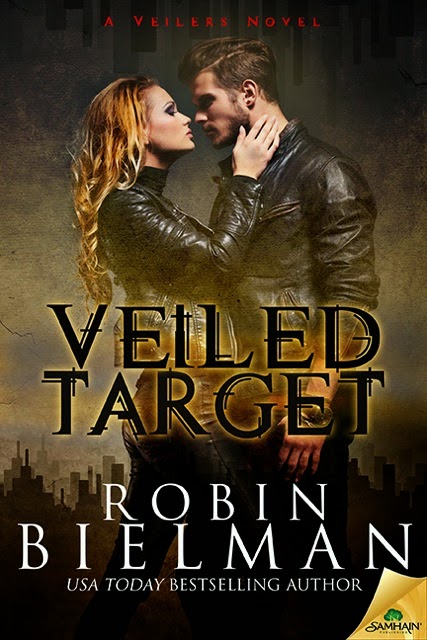 Never take Fate along on a date. The kiss goodnight could be deadly.

Tracking down Veilers—non humans—is only a sideline for Tess Damon. Vengeance for her fiancé’s murder is her reason for living. But with two botched jobs on her record, if she fails to eliminate her next mark, she’s dead. She’s not afraid to die, but not before she gets even. Too bad fate has a really bad sense of humor.

Hugh Langston, a wolfen half shifter, lives to keep both humans and his pack safe. But when rogue humans kidnap his apprentice, his rescue mission is compromised by a hot-as-hell, kick-ass woman who makes him think only one thing: mine.

Tess tries to ignore her feelings, but temptation trips her up. Especially when Hugh figures out he’s her next target and forces her into an inconvenient alliance that tests all the laws against their attraction. Now, with the line between good and evil getting blurrier by the minute, it becomes clear Tess’s only hope of living to see another day—and finding a murderer—lies with the one man she’s supposed to kill.

Review:
I'm a huge fan of Robin Bielman's Secret Wishes contemporary romance series but everyone knows I'm a paranormal girl at heart so when I found out she was writing a PNR series I couldn't wait to get my hands on a copy of the first book Veiled Target. As you can imagine I had high hopes for this story but unfortunately I didn't love it as much a I expected to. There were a lot of things about the book that irritated me but it's really hard to explain why without giving some (fairly mild) spoilers so consider that a warning before you continue reading this review.

My biggest issue was with the main character Tess, she works as an Eliminator which basically means she's a human who is trained to hunt and kill Veilers (supernatural creatures) who cross the line and start to harm others. We are constantly told how kick-ass she is and that she is an expert at fighting but we never, ever see it in action. If you were to print a picture of someone next to the words "Too Stupid to Live" in the encyclopaedia it would have to be a portrait of Tess. She gets herself into one ridiculous situation after the other and I'm sure she only survives until the end of the book on pure luck and because of the sheer stupidity of her enemies. I can't for the life of me figure out how she has survived years as an Eliminator because she should have died numerous times in just this story and there were actually times I was wishing that would happen. Basically Tess is all talk and no action, she'll tell you constantly how much she loves danger and is an adrenaline junkie but when you look at the evidence she has no skill whatsoever.

I could go into a lot more detail about why I think Tess is a moron but I don't want to stray too far into spoiler territory so I'll let you discover that for yourselves if you decide to read the book. Another issue I had was with how easy it was to guess who the baddies were, it was pretty obvious from very early on in the story and there wasn't a single red herring to point me in a different direction. When it came to the big reveal I found myself rolling my eyes at everything that happened and it felt like a fairly formulaic ending to the story.

I don't want to say the story is all bad though because there were things I liked about it. Robin Bielman has added a few interesting twists in her take on shapeshifters and vampires, she has created an interesting world and the smexy scenes between Tess and Hugh were undeniably hot. As I'm such a fan of her other books I'm definitely tempted to put this down to first book in a series glitches and give the next book a try to see if I like it more. I'm hopeful that since my biggest dislike was Tess reading a new story with a different heroine might be more enjoyable.