Review: In Bed With the Devil - Lorraine Heath 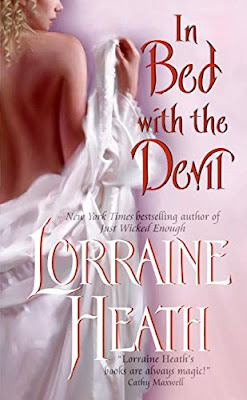 They call him the Devil Earl—a scoundrel and accused murderer who grew up on the violent London streets. A proper young lady risks more than her reputation when consorting with the roguishly handsome Lucian Langdon, but Lady Catherine Mabry believes she has no choice. To protect those she loves, she would do anything—even strike a bargain with the devil himself.

Lucian desires respectability and a wife above all else, but the woman of his choosing lacks the social graces to be accepted by the aristocracy. Catherine can help Lucian gain everything he wants. But what she asks for in exchange will put their very lives in jeopardy. When danger closes in, Catherine discovers a man of immense passion and he discovers a woman of immeasurable courage. As secrets from his dark past are revealed, Lucian begins to question everything he knows to be true, including the yearnings of his own heart.

Scoundrels of St. James Series:
In Bed with the Devil
Between the Devil and Desire
Surrender to the Devil
Midnight Pleasures with a Scoundrel
The Last Wicked Scoundrel

Scandalous Gentlemen of St. James Series:
(Features children of characters from the Scoundrels of St. James series)
When the Duke Was Wicked
Once More, My Darling Rogue
The Duke and the Lady in Red
An Affair with a Notorious Heiress
Gentlemen Prefer Heiresses (Novella) (Guest review from Aly)

The Hellions of Havisham Series:
(Some crossover of characters from the Scoundrels of St. James series)
Falling into Bed with a Duke
The Earl Takes All
The Viscount and the Vixen
When the Marquess Falls (Novella)

Review:
I'm hardly ever in the mood for historical romances but my friend Aly has been trying to get me to read Lorraine Heath's books for years now and I finally got around to picking up the first book in her Scoundrels of St. James series, In Bed With the Devil. The nagging paid off Aly because I really enjoyed this one! Anyway, on to the actual review:

Our hero Lucian has a bad reputation, so bad that he's actually known as the Devil Earl and even dancing with him could be enough to ruin a young lady's reputation. Growing up on the streets as an orphan he was raised out of poverty by the man who believed he was his long lost grandson, Lucian isn't convinced the old man was correct but what young boy would pass up the chance to get off the streets and into a proper home? In spite of being accepted into the old Earl's life as his heir Lucian didn't leave his street days completely behind him and he still has a lot of contact with his old gang even now, hence the reputation. That and the fact that people think he's a murderer.

Catherine on the other hand is a well bred young lady with a spotless reputation. She desperately needs help to rescue her best friend from an abusive husband though and who better to turn to than someone who has already committed one murder, surely he would be willing to kill again? Catherine is willing to take any risk to save her friend but she's surprised when the only thing Lucian wants is for her to teach one of his childhood friends how to act like a lady. It seems like she'll be getting off pretty lightly considering the task she's set for him but things get much more complicated when her heart gets involved.

If you think some of that sounds familiar then I'll tell you that yes, there are hints of Oliver Twist in here, that story was definitely used as a starting point but then Lorraine Heath has taken that as a starting point and created her own story from there so it's not a complete retelling. I liked both of the main characters and thought they were a good match but I did have a couple of issues that stopped this from being a 5 star read. It was great that Catherine was willing to do whatever it took to protect her friend but there were times when I felt she was a little too judgemental about it, I've seen first hand how hard it is for someone to escape from an abusive relationship and it would have been even harder in Victorian times when women were considered property.

With Lucian my issue was that he was planning to marry someone else for much of the book, he wasn't technically cheating because he wasn't in a relationship with the other woman but he loved her and planned to marry her. In fact, it took the other woman telling him that he'd fallen in love with Catherine before he even figured it out, I would have liked it more if he'd realised that for himself and told the other woman he could no longer offer her marriage.

The last couple of paragraphs have been a little bit negative but overall I still really enjoyed the story and I'm definitely planning on reading the rest of the series. I've already said I don't tend to read historical romance a lot (my go to has always been paranormal romance, fantasy & sci-fi) so I won't be devouring this series over a short period of time but I'll definitely come back to it when the mood strikes me again (or when Aly's nagging becomes unbearable LOL).