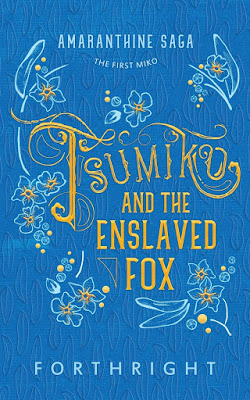 Tsumiko inherits an ancestral home, a vast fortune, and a butler who isn’t exactly human.

Humanity is rocked by the Emergence of a people who call themselves the Amaranthine. They are our myths and legends come to life. Neither human nor animal, yet embracing qualities of both, the inhuman races inspire both awe and fear. Every newsfeed is clogged with updates about the peace process, but some places don’t concern themselves with worldly affairs. Like the girls’ school run by Saint Midori’s of the Heavenly Lights, where Tsumiko Hajime grew up.

A letter from a long-lost aunt names Tsumiko heiress to an ancestral estate and its accompanying fortune. Only the legacy comes with an aloof heirloom: an inhuman butler. Argent has served the Hajime family for centuries, and Tsumiko must renew the generational bond or he’ll die. Argent hates her for the hold she has over him, but he craves her soul almost as much as he craves his freedom.

Review:
I first heard about Tsumiko and the Enslaved Fox when Ilona Andrews recommended it on her blog and that was enough to have me immediately downloading the sample to give it a try. I've never read manga or watched anime so this style of story was quite different to my usual fare but I really enjoyed the world that Forthright has created. I still have questions that I hope will be answered in future books but I was given enough information to pull me into the story without being overwhelmed by unnecessary details.

Tsumiko is an orphan who was working as a teacher at a boarding school while her brother is studying at college. I'm not sure if she's supporting him financially but they do have a very close connection and are friends as well as siblings. Tsumiko's life is turned upside-down when she discovers she has inherited a vast estate from a distant relative, now not only does she have control of a very large fortune and own a stately home but she has also inherited the staff that work on the estate. That includes a very special bond with her new butler, Argent. An Amaranthine fox, Argent has been enslaved to Tsumiko's family for centuries and he is not happy to have a new mistress that he will be forced to serve. Tsumiko is equally horrified about the thought of enslaving another person and determined to find a way to break the bond so that Argent can have his freedom.

This story is quite a slow burn one rather than an action packed adventure but it still managed to completely hold my attention and I was fascinated by the different types of Amaranthine that we are introduced to. It was interesting to see the connection between the shapeshifting Amaranthine and the not quite fully human Reavers who tend to them. I admit the whole tending thing could come across as a little creepy at times (like the way Argent would lick Tsumiko's neck or how they had to kiss the first time they met just to solidify their bond) but there was also an innocence to the connection between them. Tsumiko herself is quite naive about the new world she finds herself in and she was a tiny bit too innocent and pure for my taste but she does have an inner strength that shines through at times and she was very caring towards the people around her which is something I always appreciate.

Argent has suffered centuries of torment at the hands of Tsumiko's family so it was understandable that he found it difficult to trust her at first but I enjoyed seeing their connection grow as he got to know her better. I think what I loved most about this book was the side characters though. I really liked Michael and Sansa, other Reavers who worked on the estate as well as the younger fox Ginko who was the gardener. The connection between Tsumiko and her brother Akira was great and I'm really curious about his roommate Suuzu. I'm definitely looking forward to reading the next book in this series and seeing Forthright expand on the world they've created.