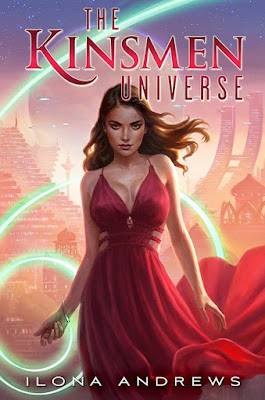 ** PREVIOUSLY PUBLISHED - This is an anthology edition of the Kinsmen Universe, which includes SILENT BLADE, SILVER SHARK, plus a new short story, and three original illustrations.**

In a distant, future world Kinsmen-small powerful groups of genetically and technologically advanced families-control vast financial empires. They are their own country, their own rulers, and their only limits are other Kinsmen. The struggle for power is a bloody, full-contact sport: in business, on the battlefield...and sometimes in the bedroom.

On the planet Rada, Meli Galdes' family is of minor rank, and were relying on her marriage to Celino, the razor-smart, ruthless leader of the powerful Carvanna empire. When he abruptly breaks their engagement, he ruins her family and guarantees that Meli will never marry, as no suitor will oppose the rich and influential Carvannas.

But Meli has a rare, secret, lethal-and valuable-talent. As a melder of energy, she's capable of severing anything in her path. So she 'leaves' her family and trains to become one of the best and most lethal of assassins, all the while covertly guarding her family's interests. Now she's ready to quit; but she has one more assignment.

To kill the man who ruined her life.

Claire Shannon is a killer...and her weapon is her mind.

Born on a planet torn by war for over 300 years, Claire is a soldier: a psycher, with the ability to read, control, and destroy the minds of enemy psychers and to infiltrate the biological network where they battle to death.

When Claire's faction loses the war, she barely escapes extermination from both sides, as her talent brands her as too dangerous to society. By so-deeply burying her ability that she avoids detection, Claire is instead deported to Rada as a refugee, where she must find work to remain. She finds a job as personal assistant to Venturo Escana, a premiere kinsman; one of Rada's most wealthy entrepreneurs—and most powerful psychers.

She thought she had left war behind, but now she must hide her skills and her growing feelings from Venturo...and this battle might just cost her everything...

The leader of the fierce Reigh people expires during an intergalactic summit, putting 30 million colonists' lives and livelihoods in jeopardy. When the new heir to the Reigh throne, Lord Nagrad, demands restitution, the phrase "'a life for a life" turns the intergalactic calamity into an arranged marriage contract between Lord Nagrad and sharply intelligent diplomatic analyst Deirdre Lebed... and the negotiation of terms becomes anything but formal!

Review:
I'd already read and reviewed the three stories in this collection so I'll just copy my original reviews below but I want to talk about the gorgeous signed, limited edition hardback that I bought from Subterranean Press. It's a really beautiful book and it includes three full colour illustrations from artist Luisa Preissler (see photos below). This book includes the two main Kinsmen stories, Silent Blade and Silver Shark, as well as the short story A Mere Formality that is set in the same world but has no crossover of characters. All of the stories have Ilona Andrew's trademark humour and I really enjoyed rereading them here. The hardback also includes an interview with Ilona and Gordon (the husband and wife writing team behind the Ilona Andrews name) that has some interesting insights into their writing process. 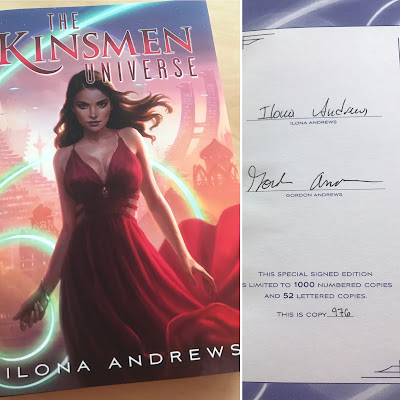 Below you'll find my original reviews for each of the stories along with Luisa Preissler's beautiful illustrations;

I've wanted to read Ilona Andrews' Kinsmen series for a looooooong time now but the second story, Silver Shark, has been unavailable for what seems like forever. Anyway, I was really excited when it was rereleased recently and immediately bought ebook copies of both novellas (and quite possibly preordered the limited edition hardback from Subterranean Press too, I mean I can't help being an IA addict!). Anyway, Silent Blade is a fairly short and fast read that takes us into the distant future and a world where some families are genetically enhanced and have all sorts of interesting abilities. The families with powers are like mafias and each control a certain part of the city, the rivalry between them is huge but they also make alliances, often via arranged marriages.

Meli's family planned to use her to form an alliance with a more powerful family and when she was 10 years old she found herself engaged to Celino but he had no intention of giving up his freedom and went out of his way to break things off. Nothing has gone quite to plan for her ever since then and she ended up distancing herself from the family so she could help them in other ways, like becoming a ruthless assassin who destroyed their enemies by any means possible. When she is offered the opportunity to get revenge on her ex-fiance she jumps at it but once again things don't turn out quite the way she intended them to.

It always amazes me how much Ilona and Gordon can pack into a fairly short story but they did a great job of creating this world and getting me to feel invested in the characters. I definitely think it helped that this feels like an early version of what would go on to become the Hidden Legacy series, it's different in a lot of ways but there are hints that this is where some of the HL world started to form and I enjoyed this starting point. I enjoyed this story a lot, yes things happen fast between Meli and Celino but based on the history between them it felt believable and it was fun to see how Meli had planned her revenge so carefully. If you're looking for a story you can devour in one sitting then I don't think you can go far wrong with this one and I'm looking forward to diving straight into Silver Shark next.

Claire is a psycher, a soldier with a lethal mental ability who fought on the losing side of a war that consumed her planet for the last 300 years. Now her entire unit is dead and the enemy is killing off any soldier they can find, especially ones with abilities like hers, so her only chance of escape is to hide her power, pretend to be a civilian and get accepted as a refugee on another planet. She has three months to settle on Rada, find a job and start building a new life for herself but if anyone finds out who she really is or what she is capable of she'll end up being deported back to her home world where she'll certainly be executed.

She has build strong shields around her mind to prevent anyone from finding out what she really is so it's quite ironic when she is offered a position working for a powerful psycher, Venturo Escana, as his personal assistant. Ven is in control of his family's security firm and if he knew what Claire was capable of she could be a huge asset to him but only if he can get over the lies she has told and learn to trust her.

This story had everything, kickass main characters who have some fantastic powers, fun world building - I especially love the battles on the bionet which were a bit like something out of the Matrix - and a romance I was totally on board with. This is a novella (around 130 pages) but the Andrews manage to pack a lot into those pages and I loved every minute of it.

I waited a long time for Silver Shark to be rereleased so I was really excited to finally get my hands on a copy. Ilona and Gordon never disappoint and this story was just as much fun as I thought it would be. My only complaint is that it left me wanting more, more of these characters, more of this world, just more of everything really! You can see how some ideas from the Kinsmen world were expanded upon and to help create the Hidden Legacy series so I think it's unlikely that they'll choose to write more Kinsmen stories but if they ever do I'll be first in the queue to buy them.

It's no secret that I'm a bit of a fangirl when it comes to Ilona and Gordon Andrews and I absolutely adore their Kate Daniels series. All of their stories are full of humour, fantastic world building and great characters and even though A Mere Formality is only a short story (with 26 pages) it's no exception.

This story is completely stand alone so you don't need to have read any of the author's previous books to enjoy it and it's available to download for free from their website here: http://www.ilona-andrews.com/book/a-mere-formality/

I'm deliberately keeping this review very vague because it would be too easy to give you spoilers but it's basically a story about three alien species who are negotiating a peace treaty. You can expect lots of innuendos, jokes and dirty talk so it's recommended for adults only but there isn't any actual sex.

For a quick read this is a lot of fun and I'd definitely recommend it whether you're already a fan of these authors or not.