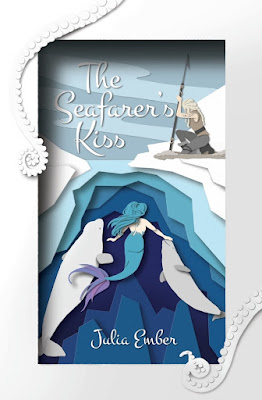 Having long wondered what lives beyond the ice shelf, nineteen-year-old mermaid Ersel learns of the life she wants when she rescues and befriends Ragna, a shield-maiden stranded on the merfolk’s fortress. But when Ersel’s childhood friend and suitor catches them together, he gives Ersel a choice: Say goodbye to Ragna or face justice at the hands of the glacier’s brutal king.

Determined to forge a different fate, Ersel seeks help from the divine Loki. But such deals are never straightforward, and the outcome sees her exiled from the only home and protection she’s known. To save herself from perishing in the barren, underwater wasteland and be reunited with the human she’s come to love, Ersel must try to outsmart the God of Lies.

Review:
Nineteen year old mermaid Ersel just wants to be free, she longs to escape from the merfolk fortress and explore the world. For years she made plans with her childhood friend Havamal but then he betrayed her by joining the king's guard and she's now more alone than ever before. When she finds Ragna, a human girl who was stranded on the glacier after her boat sunk, Ersel's dreams begin to change but if she doesn't make her escape soon she may never get the chance.

The Seafarer's Kiss is a bisexual retelling of The Little Mermaid with added Norse mythology thrown in for good measure and I enjoyed every minute of it. I guess I should probably confess that I've never seen the Disney version of the Little Mermaid so I can't compare it to the animation but I did have a book of the story as a child and there were enough similarities in this story for me to easily see the connection. It isn't a full retelling though, it uses the original story as inspiration and then goes off in it's own direction. Adding in Norse mythology was a genius idea and I especially loved that Loki was described as having both male and female attributes - their form changes every time we see them and they are only ever described in gender neutral terms. Its so rare to come across non binary characters in YA (although if you're looking for more I'd happily recommend Laura Lam's Micha Grey series which has an intersex main character) and there is also a lesbian romance so the diversity included is brilliant.

The world Ersel lives in is very patriarchal, the king is a tyrant and due to dwindling births the women are prized mainly for their fertility. When they come of age the mermaids attend a Grading ceremony where they find out how fertile they are and then the mermen fight over who they want to mate. Once mated the mermaids are pretty much kept in seclusion while they protect the eggs and try to hatch young and Ersel can't imagine anything worse than being trapped inside the fortress forever more. I really loved Havamal's character, especially in the beginning. It's obvious that he loves Ersel and wants to protect her but their dreams are so different that they could never be happy together. I was really angry when he forced her into a horrible situation but thankfully he redeemed himself later on and I'd be quite happy to read another book set in this world so we could see him get his own happily ever after.

The world building was really well done and I enjoyed Ersel and Ragna's romance. I'll admit it all happens a little quickly because this is a fairly short novel so there were times when I think it would have been even better if the story had been expanded, especially towards the end of the book. I really wanted to know what happened at the fortress while Ersel was in seclusion but the story just jumped ahead several weeks. I also thought we could have done with seeing Ersel and Ragna spend a little more time together to make their romance fully believable. If I have one complaint it was about the physical violence between the two near the end though, I didn't think it added anything to the story, in fact it soured their romance a little because there wasn't time for the issue to be fully addressed. I get that it was only one incident but they both take a swing at each other and blood is drawn so that is a major warning sign in any relationship.

Overall I really enjoyed this story though, it was a unique spin on the Little Mermaid and it kept me interested from beginning to end. I'll definitely be watching out for more from this author in the future and I need to pick up a copy of her debut Unicorn Tracks too.

Source: Received from Interlude Press in exchange for an honest review