Who doesn't love a good time travel story? I know I do so I added Passenger to my to read pile as soon as it was published. I've waited far too long to read it but that could be a bonus considering book 2 (Wayfarer) has already been published so I can happily binge read them both. This will be my first book by Alexandra Bracken but I've heard great things about her writing so I have very high hopes for this series! 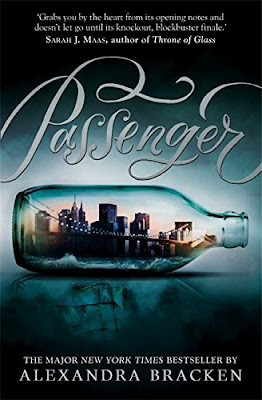 In one night, Etta Spencer is wrenched from everything she knows and loves. Thrown into an unfamiliar world, she can be certain of only one thing: she has travelled not just miles, but years from home.

Captain Nicholas Carter is tasked with delivering Etta to the dangerous Ironwood family. They are searching for something - a stolen object they believe only she can reclaim. But Nicholas is drawn to his mysterious passenger, and the closer he gets to her, the further he is from freedom.

The Edges of the World

Together, Etta and Nicholas embark on a perilous journey across centuries and continents, piecing together clues left behind by a desperate thief. But as Etta plays deeper into the Ironwoods' game, treacherous forces threaten to separate her not only from Nicholas, but from her path home - for ever.