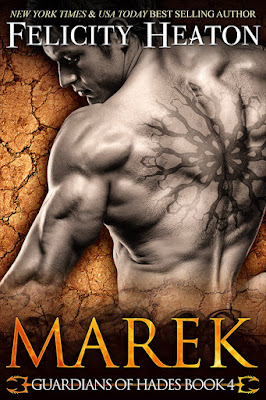 Prince of the Underworld and Lord of Earth, Marek was banished from his home by his father, Hades, two centuries ago and given a new duty and purpose—to keep our world and his from colliding in a calamity foreseen by the Moirai. Together with his six brothers, he fights to defend the gates to the Underworld from daemons bent on breaching them and gaining entrance to that forbidden land, striving to protect his home from their dark influence.

Haunted by a betrayal that shattered him and set him on a dark path of vengeance, Marek closely guards his heart, as determined to keep it safe as he is to wipe the scourge of vampires from the world.
Until a hunt lands him in the presence of a beautiful woman who threatens to steal that heart as she battles his sworn enemy, her graceful moves igniting a passion so fierce and hunger so deep it consumes him.

Caterina’s sole purpose for the last decade has been freeing her brother of the curse of being turned into a vampire. When an alluring dark warrior steps in to help her battle a nest of bloodsuckers, her entire life is tipped off balance. She knows deep in her heart the warrior can help her save her brother, but can she trust a man who is driven to slay every vampire he meets?

When Marek’s enemy emerges from the shadows, and Caterina is pulled down a dark rabbit hole into a dangerous world, will they be strong enough to overcome their pride and their prejudices or will a dark turn of events shatter both their hearts?

Review:
It's been a couple of years since the last book in the Guardians of Hades series was released so while I was excited to dive back into this world I did worry that I might get confused and not remember enough about the previous stories. Luckily Felicity Heaton did a great job of bringing me back up to speed and within a few pages I was just happy to be back with these characters.

Marek is luckier than some of his brothers when it comes to his abilities and they cause less problems for him in the human realm but he has spent hundreds of years caught up on a previous betrayal and spends his time sneaking around hunting vampires when his brothers' backs are turned. It is during one of these attacks that he first meets Caterina who is also hunting vampires but for very different reasons to Marek. Caterina may be human but she's aware of the supernatural so although she doesn't immediately recognise Marek for what he is she does understand that he's not a normal human. The two bond pretty quickly over their mutual dislike of the vampires but Caterina's life takes a very difficult turn when she is targeted by Marek's enemies.

I don't want to say too much about what happens to Caterina but it was definitely shocking and there were some really interesting developments in the ongoing story arc throughout this instalment of the series. As much as I enjoyed the romance between Marek and Caterina I also loved getting to find out more about Calistos and about all of the brothers' backgrounds. Their enemies are building up to something big and I think the action is only going to get more intense in the next couple of books.