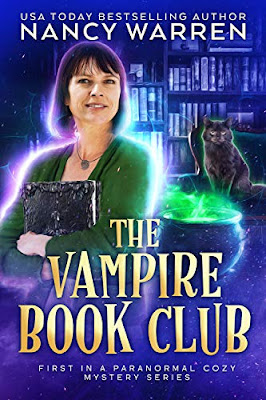 I was a divorced, middle-aged witch banished to Ireland.
My life could be summed up in a limerick...

There once was a misguided witch
Who tried a man’s fate to switch
Her punishment set
To Ireland she must get
But better than feathers and pitch!

With a name like Quinn Calahan I sounded as Irish as a leprechaun dancing a jig on a four leafed clover, but the truth was, I’d never been closer to the emerald isle than drinking green beer at the St Patrick’s day street party in Boston until I messed up so badly I had to leave the US. I was offered a job in a tiny village in Ireland that no one’s ever heard of. And I think that was the point in sending me there. How much trouble could a divorced, middle-aged witch get into in a village that boasted very few residents, one crumbling castle that attracted no tourists, and a post office that was only open Mondays and Thursdays?

You will fall in love with this series about second chances, magical mayhem, and book club unlike any other. From the author of the best-selling Vampire Knitting Club series.

Review:
Quinn knew it was wrong using her magic to try and save the life of her ex-husband but she never expected the consequences to be quite so harsh. Banished from her coven she is given 2 weeks to pack up her entire life in America before being shipped off to a small village in Ireland where she's due to take charge of the local book shop. It's a total culture shock for her when she first arrives but what really throws her for a loop is the dead body she finds behind the counter the first time she enters the shop. It's not in Quinn's nature to sit back and wait for someone else to solve this mystery but when you're new in town it's hard to tell friends from potential foes.

The Vampire Book Club was a fun start to Nancy Warren's new series. I liked Quinn's character and found it made a change to read about a slightly older character than most books, Quinn is in her 40s and pretty confident in herself which was great. Her life has been turned upside down but she's determined to make a go of things and throws herself into making new friends and meeting the other villagers. I would have liked to have seen a little more of her magic so I hope that comes out to play more in future books.

I love the idea of the Vampire Book Club and the members seemed quite fun so I'm looking forward to spending more time with them. I also enjoyed meeting the residents of Ballydehag, there were lots of colourful characters and plenty of them are keeping secrets too. I'm really curious to find out what happened to the owner of the book shop, it appears she was also sent away after doing something she shouldn't have but we've not been given any information about what she did or where she's gone. I think there's definitely more to learn about there so it'll be interesting to see what we discover in the next book.