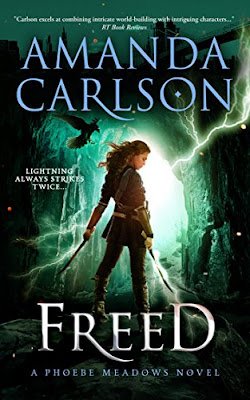 Phoebe Meadows has one thing on her mind: Free her mother.

For the last month, Phoebe has been training in the Valkyrie stronghold readying for battle. But when she stumbles into a secluded valley after a day of grueling practice, she’s given a dire prediction. Phoebe must leave the stronghold immediately with the aid of the giant, Junnal, to rescue her mother from the dark elves. If Phoebe fails, Leela will be transported to a place that can no longer be reached.

Leaving Fen behind threatens to undo her, but Phoebe stays true to the mission. Along the way, she allies with the god Baldur and an old white elf mage. Together, they storm the realm, and with the help of an angry wolf and her Valkyrie sisters, they just might stand a chance to free the valiant shieldmaiden.

But Phoebe soon learns that in order to save her mother, she might lose something too precious to sacrifice...

Review:
I loved Struck so I couldn't wait to read about more of Phoebe's adventures in Amanda Carlson's newest release Freed. Phoebe has come a long way from the girl we met in the first book, she has really embraced her Valkyrie heritage and has been training incredibly hard to learn how to use her powers. Of course most Valkyries start learning to fight practically from birth so she's still a long way behind most of her contemporaries but she doesn't let that stop her and she's determined to catch up as quickly as possible.

When Phoebe is offered the chance to rescue her mother from the Dark Elves that have been holding her captive she jumps straight in head first even though she knows the risks are high and she's not had time to fully prepare herself. You have to love that about Phoebe, she's always willing to do whatever needs to be done to protect the people she cares about and this is no different. The rescue attempt gives Amanda Carlson a chance to expand on the Norse mythology used in this series and we get to explore another of the Nine Worlds through Phoebe's eyes. I'm absolutely loving the variety of creatures, gods and realms this series has to offer and from events towards the end of this book it's only going to get better in the next book.

You'll get a chance to catch up with all your favourite characters from the previous book. Fen is a great partner to Phoebe but I'm glad she is still her own person and they aren't glued to each other's sides. He's very protective of her but he also trusts her to look after herself which is good to see. Tyr, Sam and Ingrid are all still on the scene although I think they get a little less page time this time around. That was more than made up for by the introduction of Baldur and Callan though, they are both really interesting characters but I'm not going to tell you much about them so you'll just have to read the book and meet them for yourselves.

This series is going from strength to strength, the books are fast paced and incredibly easy to read, the characters are multidimensional and easy to love (or in some cases hate!) and the world building is getting better and better. I can't wait to see where the series goes from here, the build up for the next book is intense and I have a feeling it's going to be epic.