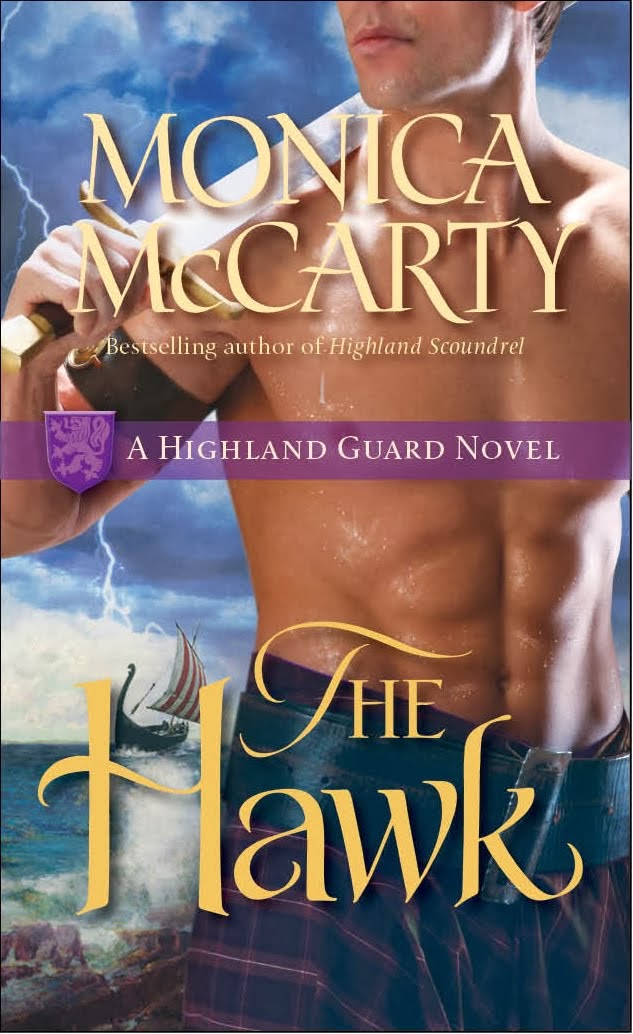 Hand picked by Robert the Bruce to help him in his quest to free Scotland from English rule, the elite warriors of the Highland Guard face their darkest days. When Bruce is forced to flee, his bid for freedom rests on the shoulders of one extraordinary warrior.

Erik MacSorley is a brilliant seafarer who has never encountered a wind he could not harness or a woman he could not win—until he drags a wet, half-naked “nursemaid” out of the waters off the Irish coast. Ellie’s ordinary appearance belies the truth: She is in fact Lady Elyne de Burgh, the spirited daughter of the most powerful noble in Ireland. Worse, this irresistible woman is determined to prove herself immune to Erik’s charms—a challenge he cannot resist.

Her captor may look every inch a rugged warrior, but Ellie vows that it will take more than a wickedly suggestive caress to impress her. Yet Erik will sweep away Ellie’s resistance with a desire that resonates deep within her heart. Still, he is a man driven by loyalty, and she is a woman with secrets that could jeopardize Bruce’s chance to reclaim his throne. As the battle for king and country sounds across the shores, will Ellie’s love be enough to finally tame the legend known as the Hawk?

Highland Guard:
The Chief
The Hawk
The Ranger
The Viper
The Saint
The Recruit
The Hunter
The Raider (2014)

Review:
After really enjoying The Chief I was looking forward to continuing this series and getting to spend more time with Robert the Bruce's elite Highland Guard. Having already met Hawk and seen what a charmer he is I was sure I would love his story and Monica McCarty didn't disappoint.

This story sees Hawk charged with the task of employing a group of Irish mercenaries to fight for Robert against the English King, Edward. Hawk is in charge of helping the men avoid the English as they cross the Irish sea to join up with Robert's army and he must make sure they arrive on time to take part in the battle that has been planned as Robert fights for control of Scotland. Ellie is the daughter of a powerful Irish Lord, one who publicly backs Edward even though he is related to Robert by marriage. When Ellie is caught eavesdropping by Hawk and the mercenaries she pretends to be a simple nursemaid because she fears what could happen if they realise she is from such a prominent family and comes with a healthy dowry. The last thing Hawk wants to do is take Ellie along with him but his honour won't allow him to leave her with the mercenaries when he knows that they want to kill her.

Hawk is a cocky bugger but I dare any woman to resist his charms, he is fearless and full of himself but at the same time he comes across as incredibly likeable and he really does have a way about him that leaves most women throwing themselves at him. Ellie seems completely immune to him though and it was hilarious seeing how shocked he was that she was able to resist him. Hawk is a risk taker, he is convinced that he will always win and he takes great pleasure in baiting the English and then coming out on top in their confrontations. He lets Ellie believe that he is a simple pirate because it isn't safe for her to learn of his connection to Robert, he cares for her and worries that she would be in danger if she found out the truth.

I loved the fact that Ellie stands up for herself and fights to escape when Hawk captures her. She is understandably wary of the men who have captured her and she doesn't take their word that she won't be harmed, after all they have given her no reason to trust them. It takes time for her to get to know them before she starts to realise that she is safe and it is only then that she stops plotting ways to escape. I can find it really irritating when characters aren't honest with each other about who they really are but in this case I felt they both had good reasons to keep their identity a secret. As Ellie starts falling for Hawk she wants to be honest with him but until she is sure of his feelings she is scared to tell him the truth in case he marries her just for her dowry rather than because he really cares about her.

Monica McCarty takes time to develop the romance so it never felt rushed or unbelievable, I enjoyed watching the characters getting to know each other and it was a pleasure to see them slowly fall in love. Alongside the romance you have the fantastic banter between Hawk and his men, I do love the camaraderie they have and I'm enjoying seeing how all of the Highland Guard members have a distinctive role to play in the ongoing story of Robert's fight for the crown. We don't get to spend time with all of the Guard because they're all off carrying out very different missions but I can't wait to continue reading the series to see how everything ties together in the long run.