Review: Up from the Grave - Jeaniene Frost 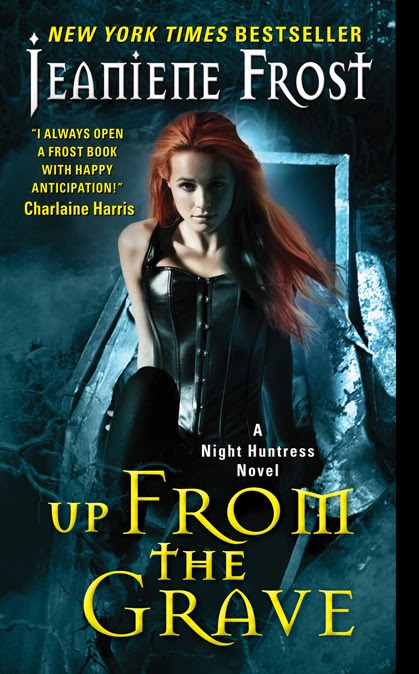 Lately, life has been unnaturally calm for vampires Cat Crawfield and her husband, Bones. They should have known better than to relax their guard, because a shocking revelation sends them back into action to stop an all-out war . . .

A rogue CIA agent is involved in horrifying secret activities that threaten to raise tensions between humans and the undead to dangerous heights. New Cat ad Bones are in a race against time to save their friends from a fate worse than death . . . because the more secrets they unravel, the deadlier the consequences. And if they fail, their lives - and those of everyone they hold dear - will be hovering on the edge of the grave.

Review:
I've been a huge fan of the Night Huntress series ever since I first discovered it, I love Cat and Bones but I also love (or love to hate) all the side characters we have come to know so well throughout the series and the spin off stories. I was upset when I found out that Up from the Grave was going to be the last book in the series, I understand and respect Jeaniene Frost's decision to end things here rather than drag out the storyline but that doesn't mean I felt ready to say goodbye. I'm going to miss these characters but I guess that's the good thing about books - you can always reread them! We also have the final book in Vlad's spin off to look forward to and I'm holding on to hope that we might get an Ian book or two at some point in the future too.

Up from the Grave contains everything fans of this series would expect - lots of action, great interactions between Cat and Bones, a nasty enemy with seriously evil plans and the team joining forces with some surprising allies to save the day. I'm going to admit there were a couple of things I didn't like so much though, things that felt unnecessary to me and lowered my rating slightly, but I can't really say too much without veering into spoiler territory so I'm going to leave it at that very vague pronouncement! What I did enjoy was seeing all of the characters I've come to love play a role in the story. Denise proves what an amazing friend she is in this one and Cat is lucky to have someone like that at her back, I think we could all use a friend like Denise and I was glad she got another chance to shine. Ian is also a stand out character here and the more I see of him the more desperate I am to read a full length story about him!

I love seeing how far Cat and Bones have come in their relationship, they are so much stronger now than they were in the beginning and they really are unbeatable when they're working as a team. They are one of my favourite fictional couples and have been for a long time now so I'm going to miss them. This series is certainly one that will be staying on my keeper shelf.