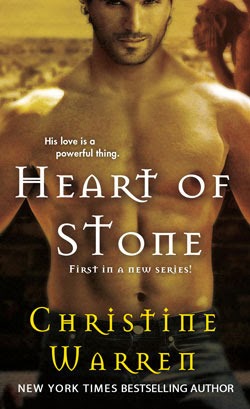 Ella Harrow is trying to carve out a normal life for herself. Well, as normal as an art geek with psychic abilities can hope for. As museum docent and gift-shop manager, Ella is able to keep her distance from people—and her powers in check—while surrounding herself with the artifacts she loves. But how on earth is she supposed to act normal when a thousand-year-old statue on the museum's terrace suddenly comes to life?

Not your ordinary gargoyle, Kees has been asleep for eons, waiting for a portent of evil to wake him from his slumber. Kees isn't a vision; he's a bat-winged guardian created to protect the world from the seven demons of the Dark. Somehow, Ella triggered his reawakening. Maybe the demons have been unleashed? Maybe his heart is finally ready to be chiseled open? The fate of the world isn't carved in stone…yet.

Review:
I was really looking forward to reading Heart of Stone, I haven't come across many paranormal romances where gargoyles are the main supernatural character but I've enjoyed the ones I have read so I had high hopes for this one. Unfortunately there were so many inconsistencies and things that bugged me about the story that I struggled just to finish it and I'm not sure it's a series I will be continuing with. It's hard to explain what I didn't like about the story without talking about what happens so, although I'll try to keep the spoilers to a minimum, you might not want to continue reading this review if you haven't read the book yet unless you don't mind being told part of the plot.

I thought I was going to like Ella at first, she is shy and keeps herself to herself but she was amusing and I was looking forward to seeing her come into her own as the story progressed. Unfortunately fairly early on she is attacked by a real creep who seems quite determined to rape her and her reaction really annoyed me. After passively accepting what is happening for ages Ella finally slaps her attacker and I started to think that she was going to stand up for herself (hooray!) but it isn't long before she starts to feel guilty and regret the fact that she might have hurt him (what?!). I was further irritated when her boss interrupts them, it is quite obvious that something untoward is going on but they all agree that it's probably best not to discuss what happened and agree to go on their merry way. At this point Ella starts wishing that someone had been there to protect her - even though she apparently has these special abilities that she could have used to defend herself but for some unknown reason she would rather be raped than use them!

While Ella is standing around complaining to the gargoyle statue that he didn't rescue her she is so oblivious to her surroundings that a second attacker is able to sneak up behind her with a knife. Luckily this time the gargoyle decides it's time to step in and he comes to life and saves her. OK, I get that it would be a shock if a statue came to life in front of you but considering he just saved her life you might think that Ella would be grateful. Well, unfortunately you'd be wrong - in fact she starts screaming, calls him a monster and uses her super special ability to attack him. So she can't use her power to defend herself from the guy who is trying to rape her but she can use it to go after the gargoyle that just saved her from a knife attack? I'm sorry but I'm struggling to see the logic there!

Gargoyle, Kees, is actually surprisingly patient with her. He lets her get away with attacking him and he waits for her to calm down before questioning her to find out what has woken him up. I have to warn you there are quite a few plot holes when it comes to the gargoyles, they are supposed to be defenders of humanity who can only be woken up by their guardians when they are needed to protect the world from demons but unfortunately someone has been killing off the guardians and now most of the gargoyles have been lost. When Kees is in his statue form he is aware enough of his surroundings to keep fairly up to date with the latest technology and fashions, he even talks in a modern way in spite of the fact that he's been asleep for centuries, but he isn't aware of his current location and why he is no longer with his guardian. That just didn't make sense to me - either he's watching what is going on around him or he isn't, why would his knowledge be so selective? Surely he would at least have been aware of his location change even if he hadn't been able to wake himself up to do anything about it?

I'm not even going to keep writing about the things that didn't make sense because I'd be here all day so let's move on to the romance between Kees and Ella. You've probably already guessed by this point that I wasn't the biggest fan of Ella but for some reason I still had high hopes for Kees. I mean, here you have this protective alpha gargoyle who can not only fly but who can also transform into an incredibly sexy human - what's not to like about him? Well, his attitude for a start and unfortunately that was a major turn off for me. He is so determined to not show any emotions that he acts like, well, for want of a better word, stone. He is cold and hard and if I was Ella I'd have punched him on multiple occasions. They quickly give in to their attraction for each other and sleep together but since Kees is too scared to have any kind of feelings he then proceeds to pretty much ignore Ella and treat her like crap for the rest of the week. While he's busy being cold towards her she is for some strange reason busy falling in love with him - don't ask me why because I sure as hell couldn't figure it out. After a week of tension Kees finally decides that he really does want to be with her so they end up back in bed together, afterwards Ella confesses that she loves him and he doesn't respond which has her feeling like he's going to go back to giving her the cold shoulder and leaves her feeling devastated. So the next morning Ella leaves for work without before Kees wakes up and he has the gall to be annoyed with her because she left without saying goodbye. Seriously, are you kidding me?

You'd hope that since I didn't like either of the main characters and I didn't believe in the romance that at least there might be some decent fight scenes? After all, the gargoyles are supposed to protect the world from demons so that should lead to some pretty scary bad guys right? Unfortunately you'd be wrong again and not only are the bad guys pretty pathetic (and easy to guess!) but our hero and heroine are pretty damn stupid too. I'm not even sure how they survived to the end of the book if I'm honest. Does this series have potential? I'd have to say possibly, the fact that the next book features a different main couple does automatically makes me more interested in reading it. If there weren't so many holes in the world building then I would have loved the mythology but after being so disappointed with the first instalment I'm not sure I'll be able to bring myself to carry on reading this series.