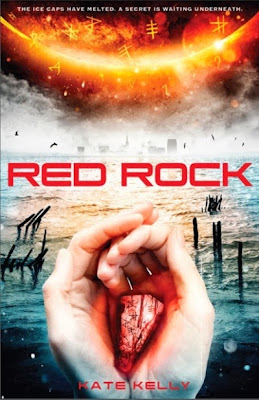 The ice caps have melted. Only scavvers live in the flooded towns.

The world has changed, but as 14-year-old Danni Rushton soon learns, it isn't the first time. Danni's life is turned upside down when her aunt is assassinated. With her dying breath, she entrusts Danni with a strange, small rock. Danni must not tell a soul that she has it. But what is the rock for, and to what lengths must Danni go to keep it safe?

Fleeing from the barren terrain of Greenland to the flooded ruins of Cambridge, Danni discovers that friends aren't always what they seem and a rock isn't always just a rock . . .

Review:
When Danni's aunt returns from a mission to Mars she just has enough time to hand Danni a mysterious rock and make her promise to keep it hidden before she is assassinated. Danni's world is turned further upside down when her uncle is taken into custody by the Mars Exploration Agency (MEXA). Forced into hiding and desperately searching for answers Danni's journey will take her from Greenland, through the remnants of Cambridge and across Europe to Malta and Italy. Danni must find out what the rock she was given is for and just why MEXA is so desperate to get their hands on it but who can she trust to help her?

I was intrigued by the idea of Red Rock as soon as I read the synopsis, a world where the melting icecaps have caused widespread flooding is scarily believable and I was very curious about the mysterious red rock that Danni's aunt asks her to keep hidden. The story does make you think about the long term effects of climate change and how that could effect us in the not too distant future but I was really hoping for more information about how the changes had come about and what effects they had caused across the planet. We do get to see first hand the damage in certain towns like Cambridge but I didn't feel like we ever got the impact of a full global meltdown. I think I found it particularly hard to believe how easily a 14 year old girl was able to travel across not just one country but all the way from Greenland to Italy encountering hardly any problems. I guess I just expected travel to be a lot harder if the flooding had caused international problems. I enjoyed Danni's adventures and the book was certainly a page turner but I did have to completely suspend belief and learn to just go with the flow in order to enjoy the story.

Danni herself is a great character, she is very naive but I think that was believable considering her age and I admired her courage and determination to find out what had happened to her uncle. I was surprised at how easily she trusted the people she met along the way though, especially considering everything that had happened and the advice her aunt had given her before she was murdered, but again I put that down to her age and naivety. This story is aimed at the younger end of the YA spectrum (around age 10 and upwards) and it shows, I think most adults and older teenagers will have trouble believing how easily everything fits together and will spot a lot of the twists coming which is slightly disappointing. The concept for the story is great but unfortunately it just missed slightly for me, there were so many things that could have been expanded upon or added to increase the tension and I was sad that things were wrapped up so easily in the end.

Red Rock is a story with a lot of potential, I think it is one that will work really well for younger teens and there is certainly plenty of action to keep them turning the pages but I'm not sure how well it will work for older teens and adults. It was a very quick and easy read that raises some interesting questions but doesn't quite go into enough detail to open up a big debate on climate change. If you're looking for a fast paced story with some interesting concepts behind and are willing to suspend belief then it would be worth giving Red Rock a try.

Source: Received from Curious Fox in exchange for an honest review