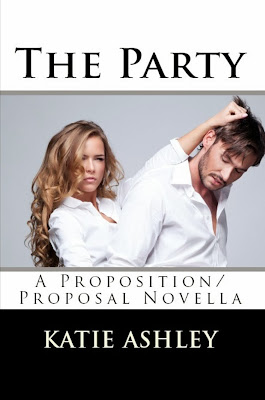 Coming off a break-up with his latest “friend with benefits”, the last thing Aidan Fitzgerald needs is a family hassle about his bachelor status. But after standing up as godfather for his great-nephew, Mason, that’s just what he gets at the Christening Party. Escaping the wrath of his father and sisters, he wants nothing more than to get to the company Christmas party. There he knows he can knock back a few stiff drinks and find some new no-strings-attached girl to take home for the night.

The last thing Emma Harrison wants is to attend another party—least of all one at work. After throwing the annual life celebration (for the anniversary of her fiancée’s death) with close friends, she’s finally gotten the courage to take matters into her own hands and become a mother. Convincing her slightly inebriated best-friend, Connor, to be her sperm donor was a lot easier than she thought, and all that’s left now is to start the process. But at her best friend and work colleague, Casey’s, insistence, she decides to make an appearance at the company Christmas party for her new boss’s sake.

Neither Aidan nor Emma could imagine what fate had in store for them at the party.

Review:
Although The Party is technically a prequel to The Proposition I took the advice of other reviewers and read it after the rest of the series which I think was probably for the best. Although I do think you could read this first if you want to get an idea of Katie Ashley's writing style I think I enjoyed it more because I'm already invested in the characters. If this is your first encounter with the couple you probably won't end up with the best impression of Aidan but trust me he will really grow on you in The Proposition, he is much sweeter than you'd think after reading this!

The first chapter is like an epilogue for The Proposal and it was really nice to catch up with Emma and Aidan, this is the kind of romance I wanted more of in the second book! Of course being an epilogue that does mean it gives you minor spoilers for the series but I don't think anyone picks up a romance story not expecting the couple to be together by the end so I wouldn't consider it a major problem.

After the first chapter you take a step back in time to two years previously and get to see Emma and Aidan's first meeting. If you've read the series already you'll know that they didn't exactly hit it off immediately but it was amusing to see their first encounter and I had to laugh at the things Emma said to Aidan!

At 44 pages this is a very quick read but it does give a nice little extra background into the characters and was enjoyable to read. I always appreciate it when authors go out of their way to give their fans little extras so this free read is one I'd happily recommend.