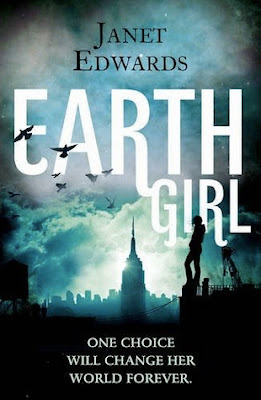 2788. Only the handicapped live on Earth. While everyone else portals between worlds, 18-year-old Jarra is among the one in a thousand people born with an immune system that cannot survive on other planets. Sent to Earth at birth to save her life, she has been abandoned by her parents. She can’t travel to other worlds, but she can watch their vids, and she knows all the jokes they make. She’s an ‘ape’, a ‘throwback’, but this is one ape girl who won’t give in.

Jarra invents a fake background for herself – as a normal child of Military parents – and joins a class of norms that is on Earth to excavate the ruins of the old cities. When an ancient skyscraper collapses, burying another research team, Jarra’s role in their rescue puts her in the spotlight. No hiding at back of class now. To make life more complicated, she finds herself falling in love with one of her classmates – a norm from another planet. Somehow, she has to keep the deception going.

A freak solar storm strikes the atmosphere, and the class is ordered to portal off-world for safety – no problem for a real child of military parents, but fatal for Jarra. The storm is so bad that the crews of the orbiting solar arrays have to escape to planet below: the first landing from space in 600 years. And one is on collision course with their shelter.

Review:
Set over 700 years in the future Earth is now a very different place. Thanks to the use of portals to travel great distances in a short time period humanity now inhabits hundreds of planets across space. Main character Jarra is handicapped by an immune system that doesn't allow her to leave Earth. Those who are handicapped are often called apes or throwbacks and treated as second class citizens by off worlders who can travel between planets. Jarra has faced prejudice all of her life but she is determined to get her own back by convincing a class of university students that she is one of them. Signing up for a course with an off world university would be impossible if Jarra didn't want to study history. All history courses spend the first year on Earth studying archaeology at the famous New York dig site.

Earth was practically abandoned when humanity first started inhabiting other planets and is now mainly used for hospitals to research the immune system handicap, orphanages to raise the handicapped children and historical dig sites. Much of our history has been lost and it is up to the historians to carry out the dangerous work of digging through the rubble looking for missing information. Jarra has always been fascinated by history and has spent as much time as she could on the Earth dig sites so heading to New York main is like a dream come true. But can Jarra keep up her deception amongst her class mates and make them believe that she is really a military kid rather than handicapped and Earth bound? What would happen if they uncovered her secret?

I was very impressed with Janet Edwards' debut novel, she has created a detailed and believable future where humanity is spread across the universe thanks to the portal technology they have created. Each of the planetary systems have very different customs and behaviours and the author shows all kinds of prejudice amongst the students in Jarra's class. As much as Jarra has been looked down on by off worlders she is actually just as prejudiced as they are but her beliefs are challenged as she gets to know her classmates. I really liked Jarra's character, she was strong and determined to prove herself as good as any off worlder, you could understand why she felt resentment to those who looked down on her because of something that she had no control over. I did find it a little unbelievable when she suddenly started to confuse fact with fiction, I get why the author did it but it seemed to be glossed into quite quickly and then resolved a bit too easily at the end. I would have liked there to have been a bit more of an explanation and to have had Jarra talk more about why it happened.

Overall Earth Girl is a highly enjoyable novel though and one I would recommend to science fiction fans. What I liked most is the fact that the story is completely resolved by the end of the book so you aren't left on any kind of cliff hanger. Due to the depth of the world created there is plenty of scope for the author to write spin off stories either with the same characters or just in this version of the future but we won't be left hanging if she doesn't decide to turn it into a series. I'm looking forward to seeing what Janet Edwards comes up with next though, with this as her debut I'm sure she has a very promising writing career ahead of her.

Other Reviews:
Live Otherwise
If you have reviewed this book on your blog please leave a link to your review in the comments & I'll add the link here.