Review: Asking For It - Louise O'Neill 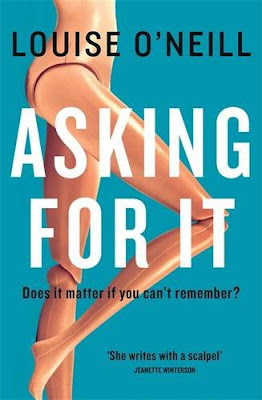 It's the beginning of summer, and Emma O'Donovan is eighteen years old, beautiful, happy and confident.

One night, there's a party. Everyone is there. All eyes are on Emma.

The next day, she wakes on the front porch of her house. She doesn't know how she got there.

She doesn't know why she's in pain.

But everyone else does. Photographs taken at the party show - in great detail - exactly what happened to Emma that night.

But sometimes people don't want to believe what's right in front of them, especially if the truth concerns the town's heroes . . .

A brave, bold and important novel about sexual consent and betrayal, victim blaming and truth in the age of the smartphone.

Review:
I honestly don't think I have the words to do this book justice, I've been trying to write this review for weeks now and I still can't seem to put all my thoughts in order but I'm going to give it my best shot and just hope that everyone will just ignore my rambling and read this book anyway. Asking For It isn't an easy read, in fact it's the kind of story that will make any sane person so mad that they want to start throwing things, but it's such an incredibly important book all the same. I honestly want to put this book into the hands of every single teenager I know. In fact I think it should be on the school curriculum because it raises so many important questions and it would be a fantastic starting point for classroom discussions on what is and, more importantly, what isn't acceptable behaviour.

I hate to say it but we live in a culture where victims are constantly being blamed for the actions of their attacker. Women are constantly judged by the way we look, the way we act and we're held accountable for the actions of people who should know better. We've all heard things like "look at that outfit, anyone who dresses like that must be up for it" or "she shouldn't have drunk so much if she didn't want something bad to happen" or "well she sleeps around anyway so why would she have said no this time". I will never understand how people can think like that ANYTHING a girl does makes it acceptable for a man to rape her but that victim blaming attitude is shared by a scary amount of people.

It's all very well to teach teenage girls to do whatever they can to protect themselves (and of course we need to continue to do that!) BUT we should equally be teaching teenage boys that it is NEVER acceptable to force themselves on a girl. It doesn't matter what she's wearing, it doesn't matter if she's drunk or has taken drugs and it doesn't matter if she's slept with 100 other boys - if she's not conscious enough to say yes then the answer is automatically NO. If she says no she means NO. No never, ever means yes and it is completely unacceptable to continue when someone asks you to stop. That should go without saying but unfortunately a lot of people out there fail to understand the basics so let's get a discussion started.

I feel like I've gone off on a tangent but victim blaming and the consequences of sexual assault are at the heart of Asking For It. Louise O'Neill shows us the gritty truth that most of us would rather not think about and she's done it incredibly well. Emma O'Donovan isn't a particularly nice character, in fact I spent the beginning of the book pretty much hating her, she's a typical mean girl - someone who is pretty and popular but who isn't very nice, she's mean to her friends, she judges everyone and she just has to be the centre of attention all the time. I was bullied by girls like her in school so it's no wonder I didn't take to her but in spite of that I still hated seeing what she went through and I wouldn't wish it on my worst enemy. I loved the way the author took such a nasty character yet still made my heart bleed for her.

Emma's whole life is turned upside down after she is gang raped at a party, she has no memories of the actual event but photographic evidence was posted all over Facebook and now everyone has seen horrifically intimate pictures of her. Everyone has formed an opinion of her based on what she was wearing, the way she was acting and her sexual history and now even her friends have turned against her. Louise O'Neill does a fantastic job of showing the effect of social media on girls in this kind of situation, both people Emma knows and complete strangers are utterly ruthless in the comments they make and the way they act towards her and that has an impact on Emma's entire family. I could understand how hard it was for her parents to accept what had happened but I absolutely hated the way they reacted to Emma and the complete lack of support she had in the aftermath. Only her brother seemed to be fully on her side but Emma found it impossible to face him or anyone else just knowing he'd seen the pictures of her.

Asking For It is a difficult story to get through but I'm so glad I read it. There were times when it made me feel physically sick and it definitely raised my blood pressure but it really made me think and that's what I loved most about it. Emma is an incredibly realistic teenager and her reactions to what happened to her were obviously well researched and very credible. I'm going to warn you now that this doesn't have a neatly tied up happily ever after ending but it wouldn't have been very realistic if it had. As much as there are things I would have liked to happen differently sadly I think what Louise O'Neill gives us is probably the much more likely outcome. This story is a must read book and I only hope my rambling review hasn't put anyone off reading it!