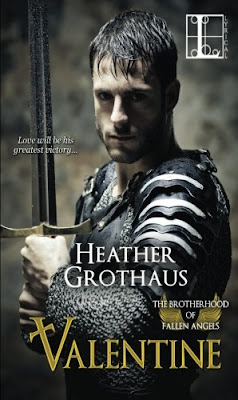 Introducing the Brotherhood of Fallen Angels—an epic new series set in the medieval Holy Land, where four heroic Crusaders find themselves caught in the crosshairs of revenge, devotion—and love . . .

He’s a man of passion and principle. But would he kill for his convictions? That’s the question that has Valentine Alesander fighting for his innocence. He’s been accused, along with three other Brothers, of orchestrating the horrific siege at the Christian fortification of Chastellet. Could this fatefully-named Crusader be a lover, a fighter, and a traitor? One woman from his past is about to find out.

Gorgeous, free-spirited Lady Mary Beckham has escaped her guardians in England to travel across the world—and find the notorious Valentine. Years ago, she was promised to him…and now she wants out of their marriage contract. Mary wants to wed another and requires Valentine’s blessing—until she discovers they share a tempestuous attraction. But with a vengeful band of sworn enemies at Valentine’s heels, is desire worth the risk of losing . . . everything?

Review:
Lady Mary Beckham has fallen in love and is ready to get married but there is a tiny problem - she already has a husband. Even though she has never met Valentine her parents arranged their betrothal when she was a baby and she needs Valentine's agreement to annul their contract. This is made even more awkward by the fact that Valentine is a wanted criminal and she's terrified that if her new fiancé finds out about their connection he'll walk away from her. Mary isn't one to shy away from a challenge though so she sets out to find Valentine, all she needs is for him to sign a piece of paper and then she can come home to her happily ever after.

Valentine isn't quite the master criminal and traitor she was expecting though and she soon discovers that he's actually an honourable man who, along with three of his friends, was wrongly accused of treason. Now really isn't a great time for his wife to turn up looking for him, he's far too busy trying to prove his innocence to have to deal with the naive young lady who has arrived without a chaperone, but he can't just walk away and leave her and when his enemies start to close in it's not just his life that is at risk. As the pair work together to escape they also find themselves fighting against a fierce attraction and Lady Mary starts to realise that perhaps she doesn't want to marry someone else after all.

I have to admit that Valentine was a little slow to get started, this is the first book in a new series so Heather Grothaus understandably has to take time to introduce the characters and also the historical setting. It may take time for the story to really get going but I liked both of the main characters and enjoyed the slow build of the romance, the banter between them was good and there were some quite comical moments as the pair did the equivalent of a medieval road trip across Europe. I'm not sure why but I was expecting this to be quite a dark story so I was actually surprised at the light tone but that didn't stop me enjoying it. I'm looking forward to getting to know Valentine's friends a bit better and seeing how they manage to clear their names and prove who was really behind the treasonous plot in later books in the series.