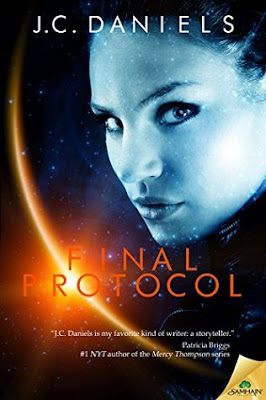 Her name is Silence. If she was ever known by any other name, she doesn’t remember.

She is a killer. If she was ever anything else, she doesn’t remember.

She has an owner. If she was ever free…well, that she does remember. She was free and then somebody gave her to a madman to pay a debt that wasn’t hers. She’s his toy, his pet…and his trained killer. She kills at his whim or she dies.

She has a target. Her so-called owner…the man who makes her life a living hell. If she could kill anybody in the universe, it would be him. But he holds her life in his hands.

And she has a wish—to find a man she barely remembers. A man she knows she once loved. The man who betrayed her and stole away her freedom.

With one final target between her and the tantalizing promise of freedom, she moves in for the kill. There’s one problem. There’s something strangely familiar about her mark. Something that echoes in the void where love used to live.

Warning: One woman with a mission, one evil bastard who lies as often as he breathes, and a man who’ll stop at nothing to find what he lost. Be warned…some questionable consent lies within.

Review:
Silence doesn't remember much of her past, all she knows is that she has suffered 10 years of torture and abuse at the hands of her owner because the man she loved betrayed her. She has spent those 10 years being trained as an assassin and thanks to the chip implanted into her brain she has no choice but to obey her master's commands. She has very little hope of ever being able to escape so when her master offers her the chance at freedom she is immediately suspicious. He promises her that all she has to do is take out one more target and then he will release her but when she takes the job she finds herself confronting the man who sold her into slavery. Who should she trust - the man she once loved who has already betrayed her or the man who has spent the last 10 years thinking up new and fun ways to make her suffer?

This was very different from the other stories we've had from J.C. Daniels, I absolutely love her Kit Colbana urban fantasy series but found myself fully sucked into this new sci-fi story to and I actually hope we might get to see more of this world in the future. Silence is a hard character to get to know, mainly because she hardly knows herself. She has spent so long being treated like an object and being forced to do things against her will that she's pretty much forgotten what it's like to be human. We do start to dig beneath the surface though, especially when her memories start to come through, and it was interesting to see her gradually coming back to herself.

Final Protocol is a fairly short and fast read but it is full of interesting world building and great characters, I'd definitely be interested in seeing more of Silence in the future so I'm keeping my fingers crossed this will turn into a series.

Other Reviews:
Rabid Reads
If you have reviewed this book on your blog please leave a link to your review in the comments & I'll add the link here.