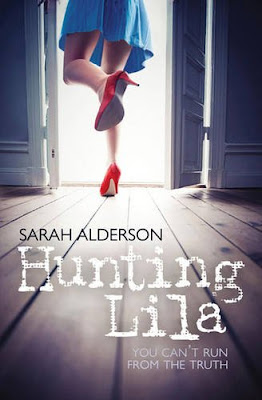 Lila has two secrets she's prepared to take to the grave.  The first is that she can move things just by looking at them. The second is that she's been in love with her brother's best friend, Alex, since forever.

After a mugging exposes her unique ability, Lila decides to run to the only people she can trust - her brother and Alex. They live in Southern California where they work for a secret organisation called The Unit, and Lila discovers that the two of them are hunting down the men who murdered her mother five years before. And that they've found them. In a world where nothing and no one is quite as they seem, Lila quickly realises that she is not alone - there are others with special powers out there - and her mother's killer is one of them . . .

Review:
Lila has the power to move things using just her mind but it's an ability she doesn't have control over. In fact when someone attempts to mug her she finds out just how out of control she really is. Scared by what happened and that her secret will be revealed Lila wants nothing more than to see her brother Jack and his best friend Alex (who she has been secretly in love with for years). Taking a flight to California she is relieved to see them both but as she learns more about the job they do and who they work for a deeper mystery is revealed. Lila discovers there are others out there with abilities like hers and it looks like they are searching for her but why? Can Jack and Alex keep her safe?

It's hard to know where to start with this review so I'm just going to come out and say that I think Hunting Lila is one of the best debuts I've read this year. The story had me gripped from the first page and I was fascinated by the psychic abilities that Lila and the others have. The action starts early and pretty much from the beginning and doesn't let up until the last page, this really was one of those books you don't want to put down.

I loved Lila's character, she is quite young and immature to start with but she really grows throughout the story and has an inner strength to her that makes it easy to like her. Her big brother Jack is very protective of his little sister and wants what is best for her, their relationship comes across as very realistic and believable. I have to admit that my favourite thing about the story was the romance between Lila and Alex, I dare any girl to read this book and not end up with a new crush. Alex is completely swoonworthy - kind, caring, sexy as hell, motorbike riding and a military guy to boot - what more can a girl ask for? I loved the fact that their relationship has been on a slow build for years and oh boy was I desperate for them to finally get together! The romance doesn't detract from the main plot though, it only enhances it. Nothing is quite what it seems and there were so many twists and turns that I didn't see coming.

I was absolutely gutted to reach the end and can't wait to get my hands on the sequel!  Hunting Lila is a fantastic debut that has me very excited to see what Sarah Alderson will come up with next, she is definitely now on my list of must buy authors. Highly recommended to anyone who is looking for a fast paced thriller with a paranormal twist.