I was very excited when Vivian Arend asked me if I'd like to take part in her Wolfie World Tour to celebrate the release of Black Gold, the first book in her new Takhini Wolves series.  This is a spin off from Vivian's Granite Lake Wolves series and although we are going to be introduced to a whole new selection of characters we are going to get to see some of the characters we know and love from the previous stories too.  I'm a big fan of the Granite Lake Wolves novellas so I can't wait to read Black Gold and I'll be posting my review on the 13th of September so make sure you come back then to read it.

Lone wolf Shaun Steven’s automatic response to the words “happily ever after”? Kill me now. Yet with all his friends settling down he’s begun to think there may actually be something to this love-and-roses crap.

One thing’s for sure: his dream mate will have to out-cuss, out-spit and out-hike him. So he never expected the one to push his forever button would be a blue-blooded Southern debutante with a voice as dark and velvety as her skin.

When Gemmita Jacobs steps off the plane in Whitehorse, Yukon, it’s about more than her research project. It’s her declaration of independence from an overprotected upbringing. Except there’s something in the air she can’t quite define—something that unexpectedly rouses her mating instincts.

Moments after their eyes lock, the deed is done—and done thoroughly. When the pheromone dust settles, though, all the reasons they don’t belong together become painfully clear.

Warning: Two strong wolves getting exactly what they deserve. Includes wilderness nookie, shifters being naughty in public places, the Midnight Sun as a canopy for seduction and grizzly shifters on the loose. Oh, and don’t forget the sarcasm.

So to kick of the Wolfie World Tour I'm going to hand you over to Vivian so she can tell you more about the Takhini pack and where they are based.  Check back tomorrow to read an extract of Black Gold! 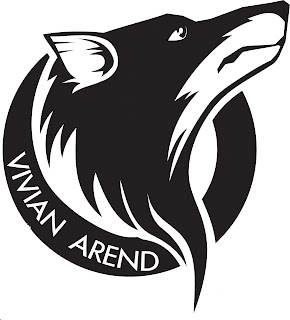 Just what exactly is Takhini?

No, it’s not a swimsuit, although you can use one there.

When I decided to expand the Granite Lake Wolves books into something other than novellas, it seemed only right to actually move OUT of Granite Lake as well. And the easy solution?

Head to one of the other northern packs. Even deciding which one was fairly simple. It all started innocently enough back in the first of the Granite Lake books: WOLF SIGNS.


Oh goodie. TJ was an idiot. Robyn glared at him and shook his hand hard enough to make him pull back in surprise. She grabbed the pad.
I’m deaf, not stupid. Don’t talk weird for my sake. She flipped the pad around to let him read it while she took another drink.
This was the hard way to get to know people. It was much easier when Tad was along, because she could talk to him and he’d pass on messages and it would end up feeling natural and not this ridiculous slow process. She sighed and grabbed the pad back. Keil laid a soft hand on her arm to get her attention and a curious sensation raced through her body.
Heat slid from his hand to her arm, tickling, tingling. What was that all about? She looked down at his hand and felt the warmth still radiating, small bursts of electricity racing up her arm and making the hair on the back of her neck stand up. He gave a slight squeeze to get her attention and she glanced up at his face.
“What pack?”
She pulled back in confusion and shrugged.
“Robyn, you said you live in Whitehorse. Are you Takhini or Miles Canyon pack?”
Here it was again. What was he talking about? It was too bad he seemed to be slightly crazy because he was the hottest thing on two legs she’d ever seen.
She hoped he was fun crazy and not kill-people-in-the-middle-of-the-night crazy.
Writing a short note she tossed the pad toward him as she got up from the table. Putting on her coat, she took a final quick glance his direction before heading outside for a breath of air.
Yup, he was hot. Out of his mind, but very easy on the eyes. Smelt yummy too. She ignored the strange throbbing sensation in her limbs and forced herself to walk outside.
And with that one sentence question from Keil, it was established that there are two packs in the Whitehorse, Yukon area. Not your typical set up—most wolf packs are exclusive in territory, but it turns out there’s a very good reason for it. Over the next while you’re going to discover that Whitehorse is a little different than Granite Lake in other ways as well.

But for today, let’s get back to the Where the Heck IS Takhini bit again.

Break out the Google maps time!! 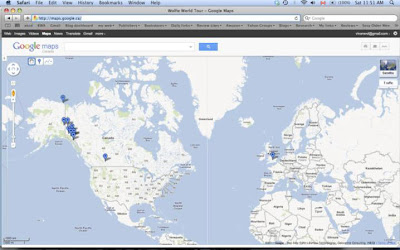 Here’s the world. See us? That blue dot to the right in England? We’re right now at Feeling Fictional. **waves** Then look way left. That cluster of dots is where the wolfies live and play.

Now we’re going to jump to western Canada. You can follow that blue line and drive the Alaskan highway northward from Calgary, Alberta to Whitehorse, Yukon in about 24 hours. Small place, Canada. 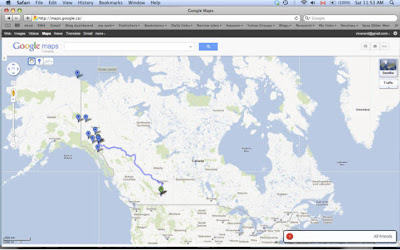 And in the next map you can see Haines, where the Granite Lake pack is located (bottom dot) Takhini is the dot that’s labeled with Miles Canyon slightly lower to the right. The dot to the left of the two of them is the actual location of Granite Lake. 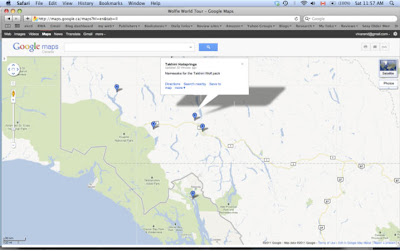 If you want to play with the map, click through HERE and you can find out where some of the other locations from the Granite Lake books and some very VERY north places you’ll find in BLACK GOLD.

Come back tomorrow for an excerpt from BLACK GOLD.

To be entered today, tell me if you knew where in the world the wolfies lived. Or have you ever been up north?

Make sure you leave a comment answering Vivian's question (above) to be entered in the giveaway!  Also check out Vivian's blog where she is hosting lots of different authors throughout the tour and will have lots of different giveaways going on. For more chances to win the $50 gift card check back here tomorrow and comment on the extract of Black Gold that I'll be posting and make sure you check out all of the other stops on the tour and comment to increase your chances of winning.  The winner will be announced on Vivian's blog at the end of the tour!

September 13 all the sites will have a release day post, and on the 14th we’ll announce the grand prize winner of a $50 gift certificate chosen from the comments at the various sites.  The winner will be announced on Vivian's blog
at 09:00