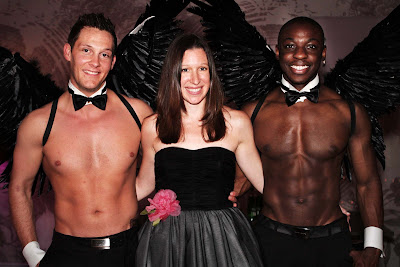 Lauren Kate
(picture taken at the Passion launch party last night with 2 of the angel waiters, how gutted am I that I couldn't make it to the event!)
You probably already know that I'm a fan of Lauren Kate's Fallen series so I was very excited when I received the following press release from RHCB!  I'm sure when you've read it you'll understand why so here it is:

Fallen in Love to be Published on 2nd February 2012

Random House Children’s Books will publish an original novel by Lauren Kate that is connected to her internationally bestselling series, Fallen. The novel, FALLEN IN LOVE, acquired in the UK by Annie Eaton and Becky Stradwick, will be released in the UK on 2nd February 2012, before the fourth and final title in the series, Rapture, is published. FALLEN IN LOVE is a riveting collection of four intertwined love stories featuring the Fallen characters that fans have grown to know and love: Miles, Shelby, Roland, Arriane, and Luce & Daniel.

Since the publication of the first book, Fallen, in December 2009, Kate’s series has become a bona fide smash hit with close to half a million copies sold in the UK alone. Her story of star-crossed lovers and fallen angels has captured the hearts and imaginations of readers all over the world, with rights sold in 33 countries and counting. All bestsellers in the United States, the novels of the Fallen series: Fallen, Torment, and Passion, have become international sensations, hitting No.1 slots in the UK, Australia and New Zealand. The final novel in the series, Rapture, will be released in the UK in June 2012 taking readers on a journey that will close the chapter on Luce & Daniel’s love forever.

Annie Eaton, Fiction Publisher comments "It's incredibly exciting for us - and all Lauren Kate's legion of fans- to have this extra-special Fallen book coming for Valentine's Day. What a treat to start 2012 with!"

The release coincides with Lauren Kate’s current UK tour to promote the third book in the Fallen series, Passion. Last night guests attended a drinks reception at Proud Camden which featured a reading from Lauren. The tour includes a visit to Ireland, and an appearance at the Bath Children’s Lit Festival this weekend.

Lauren Kate is the internationally bestselling author of The Betrayal of Natalie Hargrove and the Fallen novels: Fallen, Torment, Passion, and the forthcoming Rapture. She lives in Los Angeles with her husband.