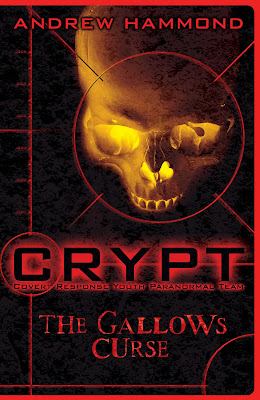 When a crime is committed and the police are at a loss, CRYPT is called in to figure out whether something paranormal is at work.  Jud is their star agent.

Jud, unwillingly paired with new recruit Bex, has just landed his biggest case yet ... people have been disappearing in mysterious circumstances while others are viciously attacked - yet there are no suspects and a complete lack of hard evidence.  The only thing that links each attack is the fact that survivors all claim that the culprits were 17th century highwaymen.

Can Jud and Bex work out what has caused the spirits of these dangerous men to return to the streets of London before they wreak more death and destruction?

CRYPT Series:
The Gallows Curse
Traitor's Revenge (March 2012)
There are a further 3 books planned in the series but titles and release dates are TBC

Review:
CRYPT (The Covert Response Youth Paranormal Team) is a secret agency set up by MI5 and a private benefactor to investigate paranormal crimes that the police are unable to solve.  When a spree of murders start occurring, with witnesses blaming highwaymen and ghosts the police are at a loss and CRYPT is called in to investigate.  It is up to star agent Jud, along with new recruit Bex, to try and discover what is going on.  If there really are ghostly highwaymen on the rampage can they find a way to stop them?

The Gallows Curse is a great start to a new series and one I'm really looking forward to continuing.  The story is without a doubt one of the scariest books I've read all year and I'm surprised I managed to read it without hiding under the bed in terror.  I have to admit I've become quite a wuss in recent years when it comes to horror so the fact that I was so gripped to the pages is a testament to how good the story is!

Jud is a great main character, he has a lot of faults but that just makes him more realistic and the more you learn about his background the easier it is to see why he behaves the way he does.  He has a big secret to keep and it is no wonder he has been traumatised by things that have happened to him.  In trying not to let his secret out he has become cut off from the people who surround him, he finds it hard to trust anyone and the stress has given him quite a temper.  I do think he has quite a bit of growing up to do and I'm looking forward to seeing this happen as the series continues.  It was nice to have a strong female lead character in Bex too, she is smart and brave and I liked the way she dealt with Jud.  My slight complaint would be that I felt their friendship was a little rushed, one minute they hated each other & the next they were very close.  I would have liked to actually see things develop between them but considering all the other things that were going on in the story that is fairly easy to forgive.

I've already mentioned how scary this was, the ghostly attacks were written in great detail and were gory to the extreme.  As the plot proceeds and you start to uncover the reasons behind the attacks I was fascinated by the historical information interwoven into the story - I actually learnt quite a bit while reading.  I also enjoyed discovering all the high tech equipment that the CRYPT agents had access to.  The Gallows Curse is an impressive debut from Andrew Hammond and I'm looking forward to seeing where he takes the CRYPT agents next.  This is sure to be a hit with horror fans of all ages and I'm already looking forward to the sequel.