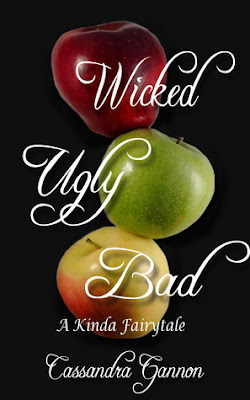 Scarlett Riding is NOT an ugly stepsister. Cinderella is the evil one in the family and Letty is determined to prove it. Unfortunately, that’s kinda hard to do from behind bars. After the debacle at the ball, Letty and her sister Dru were dragged off to the Wicked, Ugly and Bad Mental Health Treatment Center and Maximum Security Prison. While Cindy’s planning her dream wedding, her two stepsisters are being forced to endure life in the dreariest dungeon in the land.

Luckily, Letty has a plan to change that unhappy ending. If she can just get to Prince Charming and prove the glass slipper doesn’t fit Cinderella’s foot, she can reclaim her life. In order to do that, though, she needs to convince The Big Bad Wolf to lend a hand in organizing a jailbreak.

Marrok Wolf isn’t sure what to make of the idealistic redhead in his group therapy sessions. With fifty counts of Badness on his criminal record, Marrok’s used to being surrounded by crooks and scumbags. Scarlett wants to lecture him about equal rights for trolls! When the little do-gooder comes up with an elaborate plan to break their entire “share circle” out of prison, though, Marrok is certainly willing to go along with the plot. And not just because he wants to see her naked. The woman may not be wicked, ugly, or Bad, but she’s definitely the only one who can save him.

Together with a wicked witch, a timid bridge ogre, an evil prince, and other villains straight out of a storybook, Scarlett and Marrok are about to make sure that Baddies finally have a happily ever after.

A Kinda Fairytale Series:
Wicked Ugly Bad
Beast in Shining Armor
The Kingpin of Camelot
Happily Ever Witch (release date to be confirmed)

Review:
Okay I'm going to hold my hands up and say that if I'd stumbled across this cover on Amazon I don't think I'd even have got as far as reading the blurb, the only reason I even picked this up was because Ilona Andrews raved about the third book in the series (The Kingpin of Camelot) and I can't read a series out of order so I thought I'd give it a try. I'm so glad for that recommendation though because I had so much fun reading Wicked Ugly Bad! This is a fairytale retelling that is totally different to any others that I've come across, in fact it's not really a retelling, more a completely new story but with characters you may find familiar.

Cassandra Gannon has created a world where characters are either born "good" or "bad", there doesn't seem to be much rhyme or reason over who gets put into which camp, it's something you're categorised as at birth and you can't do anything to change it. What is very clear is that this is a world designed to let "good" characters thrive and where "bad" characters are constantly discriminated against. Scarlet Riding (Letty) is bad, she was born bad and she's happy to be bad just like her grandmother but she knows there is a big difference between being bad and being evil. In fact the evil one in her family is definitely her stepsister Cinderella but Cindy has conned everyone into believing she's the hard done one in the family who has been abused by Letty and her sister Dru for years.

Cindy has set Letty and Dru up and now they've been imprisoned in the Wicked Ugly Bad Mental Health Treatment Centre and Maximum Security Prison while Cindy plans her wedding to Prince Charming. Letty is determined to show everyone that Cindy is lying (she even has the glass slipper to prove it!) but first she has to arrange a prison break with the help of her support group.

I don't want to say too much more about this novel but it was absolutely hilarious, nothing you've ever believed about your favourite fairytale characters is true and the author makes it so incredibly easy to see Cindy as the bad one and have us rooting for the ugly stepsisters. I'm not going to lie there were a few spelling mistakes and this could have been incredible with a proper edit but there are FAR less errors than a lot of self published novels and I was enjoying the story so much that I just didn't care about the problems. I loved the characters, there was a brilliant romance, the humour was fantastic and the story was full of adventure. This series has me excited and I can't wait to see how the author twists all the other fairytales on their head as it continues.