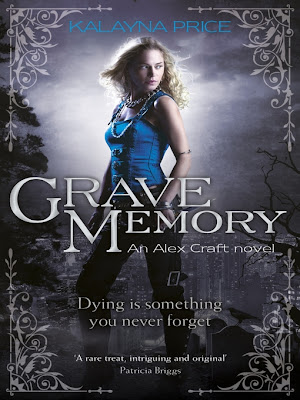 When the dead need to talk, Alex Craft is always ready to listen . . .

As a Grave Witch, Alex solves murders by raising the dead - an ability that comes at a cost and, after her last few cases, that cost is increasing. But her magic isn't the only thing causing havoc in her life. While she's always been on friendly terms with Death himself, things have recently become a whole lot more close and personal. Then there's her sometime partner, agent Falin Andrews, who is under the glamour of the Winter Queen. To top everything off, her best friend has been for ever changed by her time spent captive in Faerie.

But the personal takes a backseat to the professional when a string of suicides occur in Nekros City and Alex is hired to investigate. The shades have no memory of the days leading up to their brutal endings, so despite the very public apparent suicides, this is murder. But what kind of magic can overcome the human will to survive? And why do the shades lack the memory of their deaths? Searching for the answer might mean Alex won't have a life to remember at all . . .

Review:
Alex and her best friend Rianna have finally opened their own PI firm called Tongues for the Dead but their first case is a lot more complicated than they had bargained for. What initially looks like a simple suicide case turns out to be much more when Alex realises that the Shade has no memory of the days leading up to the death - something that should be impossible. As the rate of public suicides continues to rise it becomes clear that something darker is going on but what could be behind the deaths? As if Alex's professional life wasn't complicated enough her personal life is even worse - with Falin under orders from the Winter Queen to keep his distance regarding anything that isn't work related, and Death nowhere in sight since his declaration, Alex is desperately missing both of the men in her life. She is also feeling more disconnected with her friends than ever before thanks to the efforts of the Winter Queen and the latest revelations about her own past. Before she can worry about her personal life she is going to have to deal with whatever is causing the current spate of suicides though, but can she do it before any of the people closest to her end up getting hurt?

Grave Memory is the third book in Kalayna Price's Alex Craft series and in my opinion this series just gets better and better with every instalment. I just wish I didn't have to wait for the next book to be published! This is one of the only series I can think of that has a love triangle that isn't driving me completely crazy, I can see why Alex is attracted to both Falin and Death so although I definitely know which team I'm on (Team Death of course!) I understand why Alex is finding it so hard to make a decision. I don't think Falin is a bad guy but the fact that he is tied to the Winter Queen makes it impossible to trust any of his actions, something that is really proved to Alex in this book. I would like to see him break his ties to the Winter Queen but to be honest I'm really hoping that Alex ends up with Death!

I have been crushing on Death since the first book but so far he had remained very much a mystery man and we didn't know very much about him so I was incredibly excited that he had a much larger role in this story. If I had a crush on him before I am completely 100% head over heels in love with him now - he is such a sexy guy and his actions in this book were completely swoonworthy. There is no doubt in my mind that he loves Alex and would do anything to keep her safe and he proves that time and time again no matter what it costs him. The only problem is that love between a human and a soul collector is forbidden so any future for them isn't going to be easy. There just has to be a way for them to make it work though - I refuse to accept any other alternative!

Although I love the romance in this series it is by no means the main focus of the story which is something I really appreciate. I enjoyed the mystery surrounding the suicides and it was great to see Alex and Rianna reconnect after spending so many years apart. Rianna is having a hard time adjusting to having freedom again but I think Alex did a great job of helping her find her feet and start to experience life again. I also enjoyed learning more about the Fae and I don't envy Alex the choices that she is going to have to make when it comes to allying herself with one of the courts or declaring herself an independent. It seems like no matter which way she decides to go she is going to cause problems for herself of one kind or another. One of the things I like the most about this series is the way using magic has a price, that always makes it seem much more realistic to me but I have to admit that I don't envy Alex and Rianna their abilities. The cost of using her gift is becoming greater every time Alex accesses her grave magic and that is just going to make things even more complicated for her in the future. Kalayna Price has created a fantastic urban fantasy series that is fast becoming one of my favourites and I can't wait for the next instalment. If you aren't reading this series yet then I'd highly recommend starting with the first book Grave Witch but if you're already a fan then you're going to love this latest instalment!

Source: This book was a Christmas gift